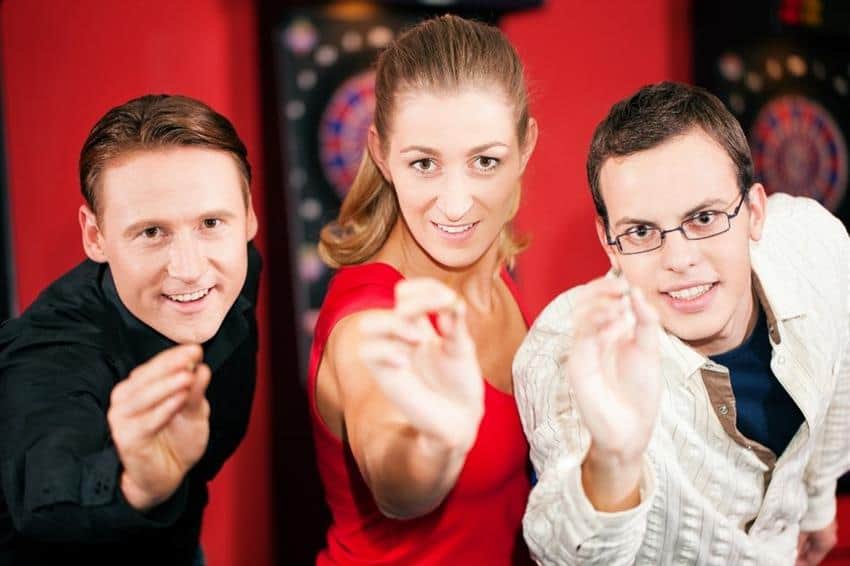 If you watch darts on TV, play in a league, pub, or bar, you know the sport is mostly played 1 on 1 or with two even teams. That’s great, but what do you do when you have an odd number of people?

You change things up, that’s what. There are dozen of dart games out there and most games have several variations. Some of those games work very well when you have a 3 player on board.

I have compiled this list mostly based on the fun factor. Of course, skill is always required when playing darts but this list was chosen to keep everyone active and interested.

So what are the best dart games for 3 players?

Hare and Hound is an around the board variant where 1 player starts a few places back on the board than the others. That player is the hound. It is the hounds’ job to catch up to and pass the other players (the hares).

Adding a 3rd player not only makes the game more difficult for the hound, it almost adds a sense of comradery among the hares.

Although you are not playing as a team, you are both working to keep ahead of the hound. Even after you get caught and are out of the game, you will find yourself cheering on the other hare/hares to escape.

Learn the full rules of Hare And Hound Darts

Halve-it is one of the most versatile games in darts. It can be played with any number of players and you get to make up the rules before you start.

Each player gets to throw 3 darts to define there starting score. Then each round you shoot at the previously agreed-upon targets. If you hit the target that round, you add that number to your score. If you miss, your score is cut your score in half!

The game is known for being relentlessly unforgiving. You can go from being hundreds of points in the lead straight to last place in just 1 round.

When playing with 3 players, I like to let each player decide on 2 or 3 targets, making for a quick 6 or 9 round game. You can go higher if you like, but the longer the game goes the more brutal it can get.

9 Lives is an Around The Clock style game that adds a greater emphasis on accuracy.

With a normal game of Around The Clock, it is just a race to the finish. 9 Lives takes that up a notch and penalizes you for missing.

Each player starts with 3 lives and if they miss all 3 darts in any given round, they are either out of the game or have to start again depending on the rules you set.

I recommend just restarting if all lives are lost as with 3 players the game is continuing anyways and it gives the loser a chance at redemption.

Hate to state the obvious here, but there is no reason why you can’t play 501 with 3 people. When you get past 3 you can start to set up teams. But 3 players is every man/woman for themselves.

It is the most popular game in darts today and everyone knows how to play. So if you are looking for a quick game of darts with 3 people and don’t feel like explaining something new there is no reason to ignore this favorite.

Learn the full rules of 501 Darts

I think I have said it before but Killer darts is one of my favorite games to play with large groups. I know 3 is not a large group but is the minimum recommended to play.

In killer, each player is designated a number. Usually, this is done by throwing a dart with their off-hand. Once everyone’s number has been established each player takes turns trying to eliminate the other player by hitting their double.

Once a double has been hit 3 times by anyone, that player is out.

You can gang up on better players, or go for the weakest. This game is hilarious fun. Alliances will be formed and revenge will be had.

Really the above games do not need to be limited to 3 players. They work well with any number of players including odd numbers.

Even if you only have 2, if you are looking for something new, give these games a shot. You will be happy you did.

What dart games do you like to play when you have 3 players? Let us know.