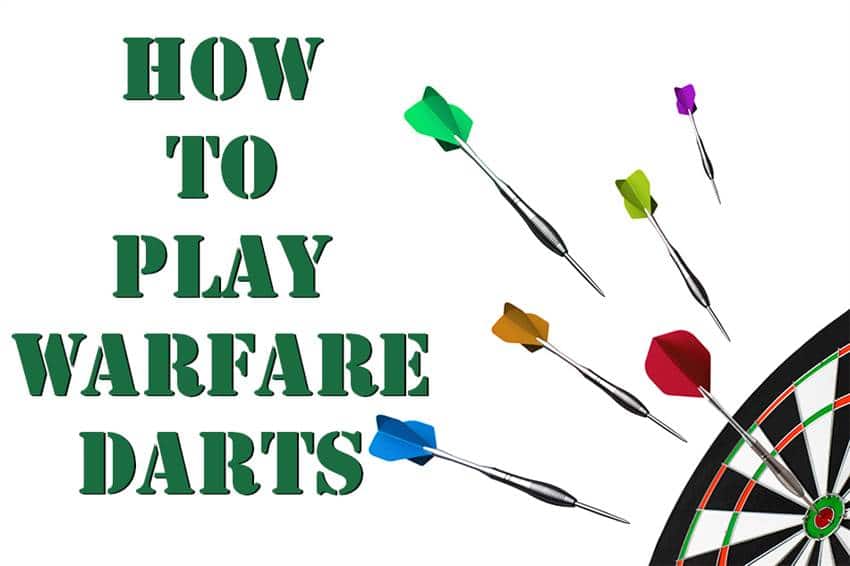 If you are new to darts, some of the more popular games can be frustrating. You have to hit specific doubles or high-value targets. A few misses and you are left behind.

What If I told you there is a game where your target is half of the board? It gets a little harder as the game goes on but if it were to easy, where is the fun in that? If this sounds like it’s for you, let me teach you how to play Warfare darts.

Warfare darts is played by splitting the board into two halves (armies). Each player or team takes turns throwing at their opponents half.

Each number on the board represents a soldier. If a number is hit that “soldier” is lost. This continues until one side has closed off all of their opponent’s numbers.

The great thing about warfare darts is you can add gameplay variations to make it as simple or hard as you like. You can also set up an extended version of the game, but first, let’s go over the basics.

You will need two sides, so either two players or two teams. The board is then divided into two halves, the top (11-13) and the bottom (6-8).

Each player will then take a turn to throw their three darts at the opposing teams half of the board. If a number is hit, that corresponding number is marked on the board. Once you have hit all the number on your opponent’s team their army has been defeated and you win.

One point of note, if you hit a number on your own half of the board, that counts as a hit as well and is marked just as if your opponent hit it. So be careful not to take out your own army.

Start by writing the player’s names (or teams) in two headers at the top of the board. Then you will write each of the numbers for that team in a downwards column.

These numbers are considered the soldiers in your army. When the corresponding spot is hit on the board, your soldier has been defeated and you should cross it out on the board.

Once all of a team’s soldiers have been defeated, the game is over and the team with soldiers remaining wins.

If you are playing multiple games, you can just put an X beside the number so that you don’t need to keep rewriting everything between rounds.

When starting a game, aim for the middle spots of the opposing team’s army and work your way outward. If you aim for the numbers on the ends you have a greater risk of hitting your own number. Save them for later when a larger part of your army has already been taken out.

When aiming for the end soldiers you should also aim on the side of caution. For example, if you are trying to take out 11, you should not only be aiming for the larger part of the singles section, you may want to aim a bit closer to the 11,14 wire to decrease the chance of your dart dropping into the 8.

If you want to increase the difficulty of this game you can make it so only doubles or only triples are in play. This doubles variation can turn the game into a great doubles practice routine and is my favorite way to play.

A variation for extended play is to make it so each number in play has 3 soldiers (single, double and triple) you need to hit all 3 before that number is closed off on the board. For scoring just mark an S, D or T beside the number when it is hit.