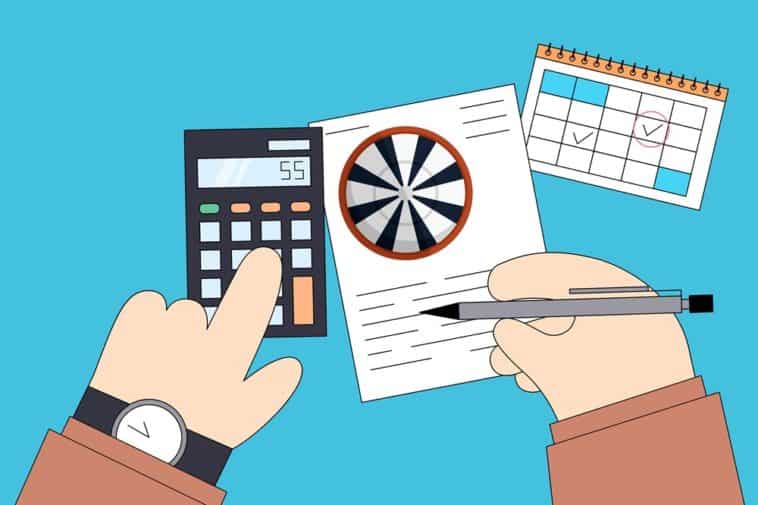 Calculating your darts average can be one of the most intimidating aspects of the game for beginner and intermediate players alike. The truth, however, is that dart averages can be easily calculated in a couple of steps using some fairly straightforward arithmetic.

What Is A Darts Average?

A darts average is the calculation of your 3 darts average score in a game of 501. This average includes all darts thrown, even those that miss the board or cause you to bust.

Darts averages are a way to quickly and efficiently gauge how well a player is scoring and how accurately they are throwing within any given set. They allow players and spectators to keep track of performance as the match progresses.

⬇Jump To The Darts Average Calculator⬇

How Do You Calculate Your Darts Average?

To calculate your darts average, take your points scored, divide that by the number of darts thrown, and multiply 3. The equation looks like this (Total Points ÷ Darts Thrown) x 3 = Your Darts Average.

At first, you might think the above calculation is simple enough, but when playing 501, the score on the board is what you have left, not your total scored. So if you did not win the leg you need an additional calculation to get that number first.

On a similar note, if you won or are playing solo, your total score will always be 501 which makes the equation the same every time.

Here’s how it is done.

Calculating Your Darts Average If You Won The Leg

If you won the leg you can simply divide 501 by the number of darts thrown, then take that result and multiply it by 3 to get your average.

I see this formula thrown around a lot, and every source fails to mention that it is only applicable if you are the one who checked out. It will not work if you lost.

Calculating Your Darts Average If You Lost The Leg

If you lost the leg of darts you first need to calculate the total points scored. It would look like this:

It is important to note that darts averages are only one slice of a player’s overall performance and should never be considered the ultimate indicator of how good a player is or has played.

How Can a Player With A Lower Darts Average Still Win?

A player with a lower darts average can still win because the average is calculated using “darts thrown”. Using three darts to finish a one dart checkout will cause your average to go down significantly.

Finishing in 10 darts or 12 darts will produce two very different averages even though you are winning in the same round.

This makes the last round of a leg very important to your average because if you use 1 dart to hot your checkout, your average is going to be much higher than if you use 3 darts, even if the checkout is the same.

What Is A Good Darts Average?

A good darts average for a non-professional dart player looking to climb the ranks should be between 60 and 80. A beginner player can expect to have a darts average of around 30.

Newcomers to the game should not worry too much about having a low average. A “good” average is completely relative and subjective. There are other aspects to worry about, like improving your mechanics, accuracy, and precision

If a player is looking to reach competitive rankings, they should work towards achieving a darts average above 80 and into the 90s. To put this into perspective, the best players in the world consistently reach averages above 100.

How Does PDC Calculate Darts Averages?

The PDC calculates darts averages using the formula: Total points scored divided by the number of darts thrown multiplied by 3.

The formula is the same as the first one we mentioned in this article. They use this method so that the player averages can be displayed in real-time.

What Is The Highest Dart Average You Can Hit?

167 is the highest average possible assuming you score a perfect 9 dart game every leg.

Of course, this has never been done. Professional games consist of several legs over multiple sets and scoring perfectly every time would be next to impossible.

In fact, no player has ever scored a perfect dart game twice in a row during televised play. So unless you are only playing one leg and one set, don’t expect it to happen any time soon.

Who Has The Highest Recorded Dart Average?

Michael van Gerwen had an average of 123.40 during the 2016 Premier League in his match against Micheal Smith. This is currently the highest darts average during televised play.

It is an incredible record for sure and it does put him well above the competition. For comparison, here is a list of some other high scorers.

As you can see MVG not only stands out with a big lead, he also has scored 4 of the top 10 biggest averages recorded. This is why many consider him to be one of the best dart players of all time

Ok. Enough about averages, what about points per dart?

Points Per Dart is a number that doesn’t get talked about much but for the sake of completeness, I should mention it.

The measurement of your points per dart or PPD is simply a value representing the average number of points you score per single dart in a game. This means that the more individual legs and matches that are taken into account to calculate a player’s PPD the more accurate the representation of skill that the value will be.

The calculation for PPD is much more straightforward.

Points Scored ÷ Darts You Have Thrown

In other words, the PPD score is the player’s 1-Dart Average.

Personal dart averages and PPDs are not the end all be all for a dart player. This is especially true for newer players, which should be worried about perfecting their mechanical skills and learning strategic assessment of the moment-to-moment gameplay through practice, as opposed to worrying about upping their dart averages.

The longer that a player stays active, and is tracking their darts average, the better and more accurate a picture that the number will provide.

Experienced players should be using their darts averages to gauge their progression. Statistically speaking, your darts average can help to place you within a specific skill bracket, even if your highest level of play is at the local pub.

Darts averages are a great comparative tool that is available to all players regardless of their skill level.