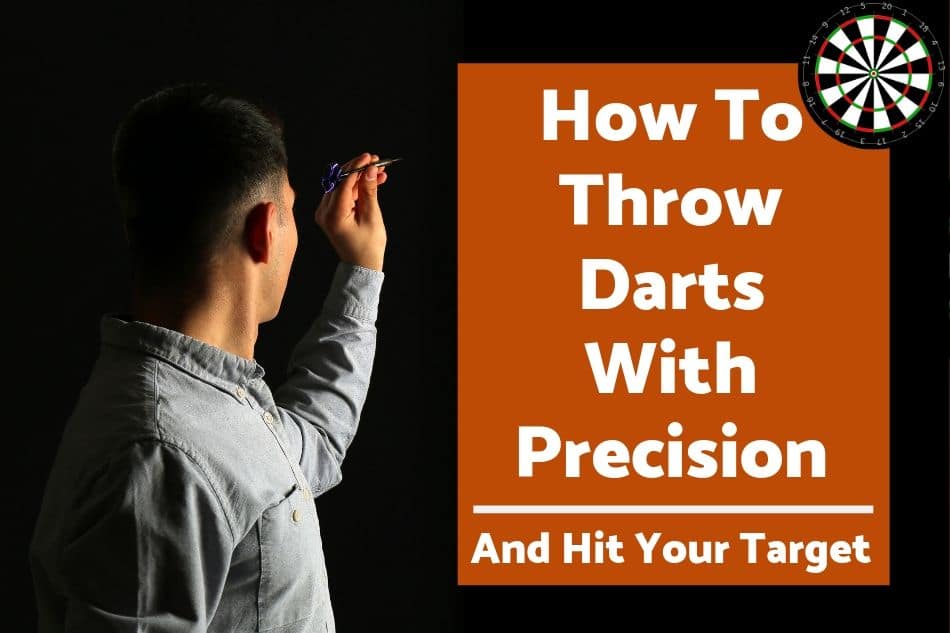 So you’re in position, you’ve got your arm up and your target in sight. You are ready to hit that bullseye but how do you throw a dart?

To throw a dart with precision, you must keep your elbow up and eye on the target. Your upper arm should not move during the throw and it should act as a base of a pendulum to launch the dart at the dartboard.

We have already covered proper dart grip, dart stance, and aiming a dart, now it is time to move on to the actual throwing of the dart.

How to Throw a Dart

When throwing darts you should be still. The movement of the forearm going towards the board is what should propel the dart.

Think of your arm more like a catapult or trebuchet with the dart as your payload.

As you extend your arm, you will need to release the dart near the end of the extension. Once the dart has left your hand you should continue moving your arm to so it is extended fully with your arm pointed at your target.

This is a basic description of how to throw a dart. Sounds simple but there are so many variables and considerations that will affect the trajectory. Let’s take a look at some of the finer details.

Angle Of Your Parabolic Curve

When you throw a dart, it does not travel in a straight line. It will start low, travel upwards a bit then fall back down to the board. This arc is called a parabolic curve.

The goal is to get as little arc as possible as a more direct path to the board will improve accuracy but there is a lot of personal preference here. I’ve seen people practically lob their darts at the board and hit with consistency.

The Factors That Affect The Trajectory Of Your Dart

Obviously, this is one that you can not change but one you should be aware of. Your height is going to determine the starting position of the dart, which has a direct effect on trajectory.

Weight Of The Dart

A heavier dart will fly straighter through the air than a lighter one. Why? Because of physics! But really those types of equations are above my pay grade. It is important to know however as changing your dart weight is one of the simplest adjustments to your game that you can make.

Angle Of Your Dart

While not the most important factor, your dart wants to fly tip forward. If you throw a dart at the board sideways, it will spin tip forward. Having a good angle on your dart will help it follow a straighter smoothers trajectory.

Strength Of Your Throw

The harder you throw your dart, the less curve it is going to have. This is one of the most important factors when it comes to fine-tuning your accuracy. If your dart is dropping at the end of the flight, you may need to throw harder or try a lighter dart.

Lastly, we need to look at when you release your dart. Imagine throwing the dart and releasing 3 inches from your face. Now imagine releasing it when your arm is fully extended. Those darts are going to follow 2 different paths.

Releasing your dart at the right moment directly affects if your dart is going to hit higher or lower on the board. There is no 1 answer for everyone. You need to find your sweet spot.

What Does This All Mean?

So that’s a lot to take in and we haven’t even covered everything. I wanted to start with the main things that affect your parabolic trajectory because these are the things you should be looking to adjust when your darts are no going where you want.

While there is some trial and error involved in the refinement of your dart throw, the components that make up the process are the same. Do not be afraid to try new things, especially if you are looking for improvement.

Going Through The Motions of Throwing A Dart

Keep Your Elbow Up While Throwing

We are not going to revisit everything in the aiming article but before you throw, before every throw, you should force yourself to think about your elbow position. That upper arm is the base of your throw. If it is off, you will miss.

Yes, your elbow is going to move a bit. You are throwing a dart after all. The important point is, you do not want to be swinging your elbow as part of your throw.

Your whole body from the floor to your elbow should act as an anchor for your forearm as it swings forward and launches the dart towards the board.

The speed at which you move your arm is going to affect how fast the dart travels and will have an effect on the arc of the trajectory. The strength at which you throw the dart is a personal preference.

At the end of your throw, it is common to snap your wrist. It is something that is hard to describe in written form.

It is not a flick, more of a push the takes place right as the dart leaves your hand. Imagine at the end of your throw, you are “pushing” the dart to where you want it to go.

It is important that this snap does not go contrary in any way to the flow of your arm or follow through. It should all be part of the same motion.

This is not a tactic to be overlooked.

The day I learned to properly snap my wrist was a literal Aha moment for me. It was one of the keys that was missing from my game. Consistency increased drastically from there.

There really isn’t much to say here. The release should be natural. You want to just release your grip and let the dart continue along the parabolic trajectory you have set.

I mentioned earlier that once your dart has left your hand your arm should still continue through the full range of motion. This is called the follow-through.

In just about every sport I can think of the requires the movement of an object from one place to another, there is a follow through. In baseball, both throwing and batting, golf, pool, hockey, and more.

It is important to follow through because this confirms a full and committed action. Not following through will cause a jerking action. Not only will this jerking throw your dart off but it can cause injury to the elbows supporting muscles.

Smooth Action – Your throw should be a smooth continuous action from beginning to end. From your stance to your grip to your release. Your body should be in alignment for that one physical action of getting your dart to target

Pacing – The rate at which you throw can affect your accuracy. Some people take their time to measure up and think through every shot. Others lift up their darts one after another and just belt them out like a well-oiled machine.

In the begin, you should take the time to aim properly. But if you are constantly aiming at the same spot on the board you will eventually get in “The Zone”.

It’s that moment where everything just right. Your dart hits the target you lift the next one up and do the exact same throw without hesitation.

While your pacing may change from night to night, finding a pace that works well for you will improve your game.

Try Not To Get Distracted – Unless you are stopping to do a count or repositioning yourself after a shot. You should throw your darts 1-2-3. Don’t look back and talk to your friends between darts. Don’t stop to throw a fit if you miss. Don’t do anything that is not directly related to throwing the next dart.

You are never going to get into that “Zone” mentioned above if you let every little thing pull you away from the board, and you want to be in that zone.

Record Your Throw – You can rely on a mate to watch you and tell you what is wrong with your throw, but if you have a phone, whip it out and see for yourself.

Set it up on a straight-on angle and record yourself throwing from the front and from both sides. You can then see for yourself what areas you can improve at.

Big Tip: When recording, call out the score of each dart when you throw. I see so many people record themselves throwing darts but what did they hit? The whole point is to improve your accuracy. Looking at the mechanics of your throw and not knowing the results of that throw is kind of pointless.

Save your videos compare them with old ones. Not only will you be able to see the changes in positioning your have made but if you were calling out the scores as I said, you will be able to see the improvements in your game as well.

Don’t Let Me Tell You You’re Doing It Wrong – If you watch darts on TV, you will see that all the pros have their own technique. Everything discussed here are standard practice but there is lots of room for variation. If you stray from the basics that fine if it helps you hit your target. There are as many throws as there are players.

At the end of the day there is no wrong way of how to throw a dart. It’s not stupid if it works.