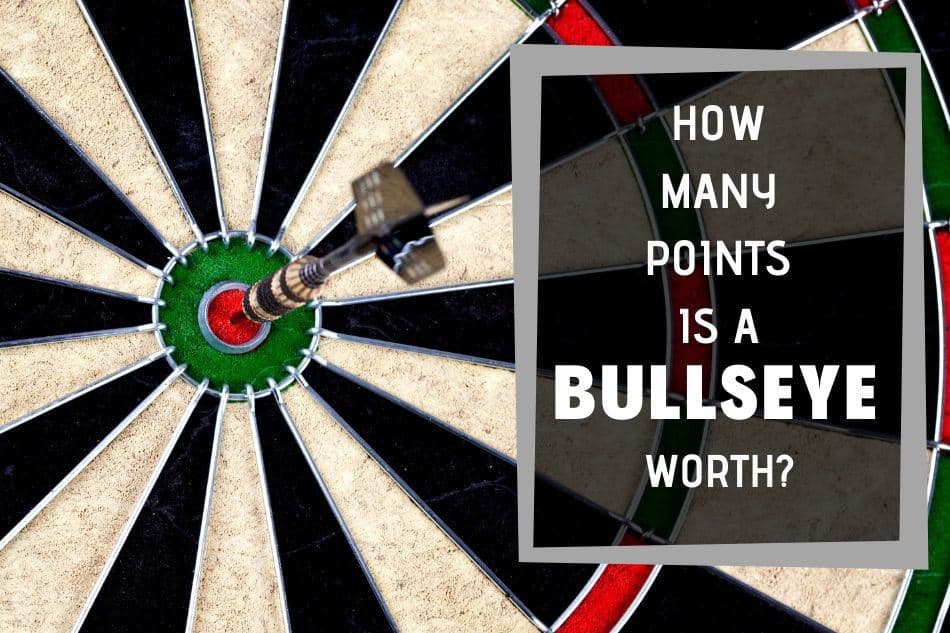 Scoring a game of darts is pretty straightforward. Nevertheless, from the perspective of someone that is not familiar with the ins and outs of the sport, scoring a leg can seem very intimidating.

In fact, one of the most common questions is, how many points is the bullseye in darts worth?

The bullseye in darts is divided into two sections. The outer green ring of the bullseye is worth 25 points, and an inner red circle worth 50 points.

In a game of 501 or 301, each player gets to throw three darts per turn. The points of each dart are tallied and written down.

Because the highest number on the dartboard is 20, you would think that the highest possible score for three darts is 60. However, that is not the case. The bullseye is worth much more than 20.

Landing three darts in the outer ring of the bull is worth 75 points and even 150 points if all three are thrown in the center bull.

In the game of 501 and 301, the bullseye does count as a double. Meaning if you have a score of 50 remaining, you can finish the game by landing your dart in the bullseye.

While the whole target (green and red) is referred to as the “Bullseye”, it is common for players to use slang to differentiate the outer ring and the center circle. Single bullseye, double bullseye, is one, green bull, red bull is another.

What Is An Alan Evans shot?

The Alan Evens shot is when you land all three of your darts in the red bullseye section. It is a term made popular by dart commentator Sid Waddell.

The Reference is in regard to Welsh dart player David “Alan” Evans who was well known for this shot. It is reported on a Scottish tour that he finished on 150 (hitting 3 bullseyes) 8 times during play!

Well, if you’ve been around the sport for a while, you are probably thinking, did this guy forget about the 180?

Of course I didn’t and I am glad you asked. It is important for newcomers of the game to know that the bullseye is not the spot worth the highest point value on the board.

Each number on the dartboard has a doubles and triples segment. These sections are much smaller and thus significantly harder to hit. However, if you manage to hit one, you can multiply the points value of that number by either 2 or 3 and get much higher scores per turn.

In fact, in standard games of x01, there are many numbers on the board that have targets that are worth more than the 50-point inner circle; triple 19 is worth 57 points, triple 18 is worth 54 and triple 17 is worth 51 points.