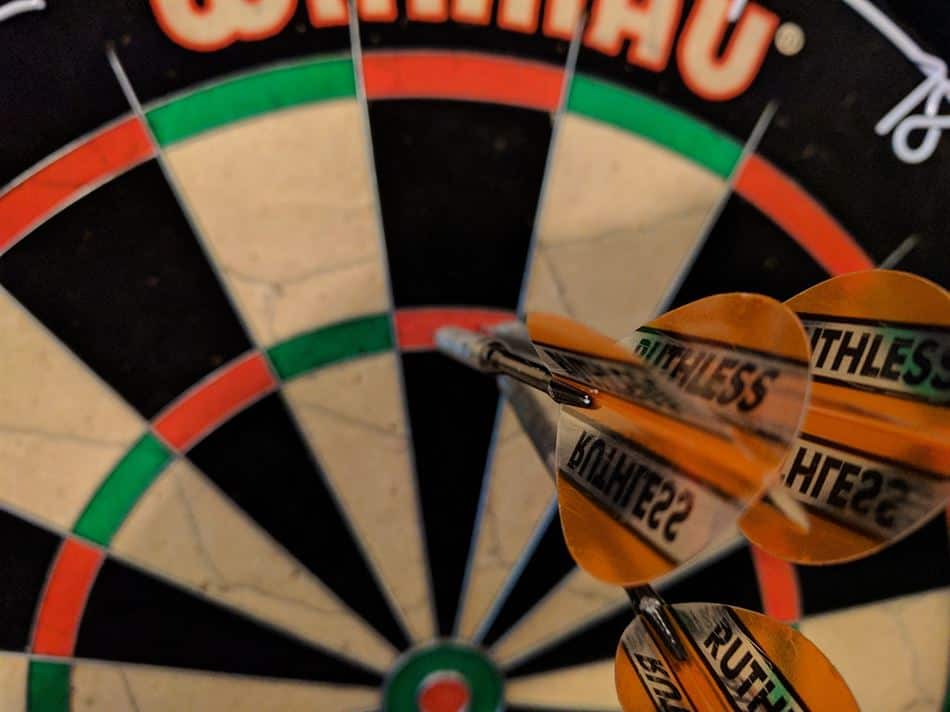 Generally, when people think of darts, they are thinking of 501. And that is what we are going to be talking about today. So, what is the highest score you can get in darts?

The highest score you can get in darts is 180 points per round. That is all 3 of your darts landing in the triple 20 segment of the dartboard. 180 is also known as a “Ton 80” or “Max Score.”

Hitting the triple 20 is extremely difficult to achieve, and hitting it three times in a row is quite the feat, one which only the true masters of the sport can manage to do consistently.

What About The Bullseye?

A lot of newcomers to darts are obsessed with the bullseye, and with good reason. Anyone looking at a dartboard would think that it is the most important segment, and thus the most rewarding.

So Should You Always Aim For The Triple 20?

Well, That depends. The first thing to keep in mind is how many points you have left. If you are at 181 or lower, three 60s will cause you to bust. You also have to consider your outs. If you have 185 left, do you really want to leave 5 for the next round?

These are all calculations that good players do in there head. If you are new, don’t worry. This type of mindset will come over time. In fact, if you are new, triple 20 is something you may not be aiming for at all.

A group of statisticians from Stanford University have actually run the math, and they have proven that depending on your skill level, attempting to hit the triple 20, is actually worse for your score than randomly and blindly throwing your darts.

If your darts are inconsistent triple 14 is actually the sweet spot on the board. A few misses on the 20 and you can end up with a score of 15 (or 3). Such a low score is almost impossible if you are aiming for the triple 14s Worst case scenario is three 9s, and a miss into the triple 9 or triple 11 isn’t nearly as devastating as the triple 1.

What About A Perfect Game Of Darts?

A perfect game of darts is a game that is finished with a total of 9 darts. Believe it or not, you do not need to score a 180 point round to achieve this. There are almost 4000 different combinations that you can throw to get a 9 dart finish in darts and several do not require a 180.