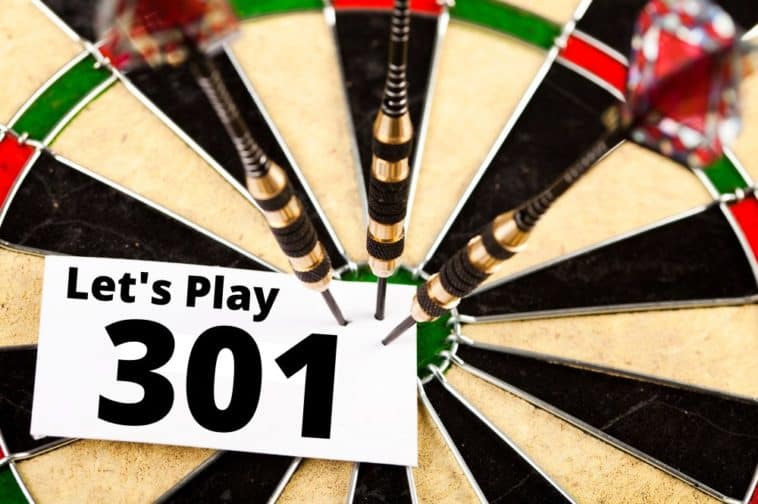 The most popular game in the world of darts is 501, and its most common variation is 301, and for good reason. 301 darts is a fun and sprightly game that offers new players an easier and quicker version of its more popular bigger brother.

In 301 each player starts with a base score of 301 points and then takes turns throwing their darts (3 per turn), subtracting their total points thrown from 301. Your main objective is to reduce your score to 0 before your opponent.

Green bull is worth 25 and the center bullseye is worth 50.

It is that simple. If you can do some quick arithmetic, you can play 301 darts, even if you have never played a game of darts before. The difficult part will be honing the accuracy and precision of your throw to a level that allows you to land darts with control.

Now that you have a basic grasp of the core concept behind a game of 301, let’s talk a little more in detail about the actual rules of the game.

While the game 301 is based around a rather simple premise, there are a few rules you will have to learn before your first time playing 301 darts.

First of all, you have to establish the order of play. Once the order has been determined, each player will have exactly three darts per turn to score as high a score as possible.

Each round the dart points that are scored is reduced from the players running total.

When a player comes close to winning, there are 2 things to note. A player must not drop their score below zero or it is a “bust” and their final dart must be a double (doubling out)

For example, if a player has a current score of 65, they could win by scoring a treble 19 and a double 4. If they score less than 65, they will have to take another turn. But, if they score a triple 19 and the second dart lands in triple 4, or a 69, he will have “busted”, and the score for that turn is voided.

The game ends when one player lowers their score to zero. They are the winner.

Scoring for a game of 301 Darts is very simple. You start by writing the players’ names across the top of the scoreboard and the number 301 under each.

When a player throws their 3 darts you can add up the amount scored and write the number on the board under the 301 and slightly to the left. You will then subtract that number from 301 and write the calculated total under the 301.

This continues down the board until one of the players hits zero and wins.

Remember, they must finish on exactly zero, and they must finish with a double. If they go below zero or score the exact amount needed without hitting a double segment to finish, no score is marked.

Strategies For Winning A Game Of 301 Darts

501, 701, 1001 are all considered x01 variations. These games will last longer and are also better for team play. Because 301 can be scored in only 2 rounds it is not a good choice when playing with teams.

For new players, you can drop the shooting to doubles to get out and just go straight out to make it easier.