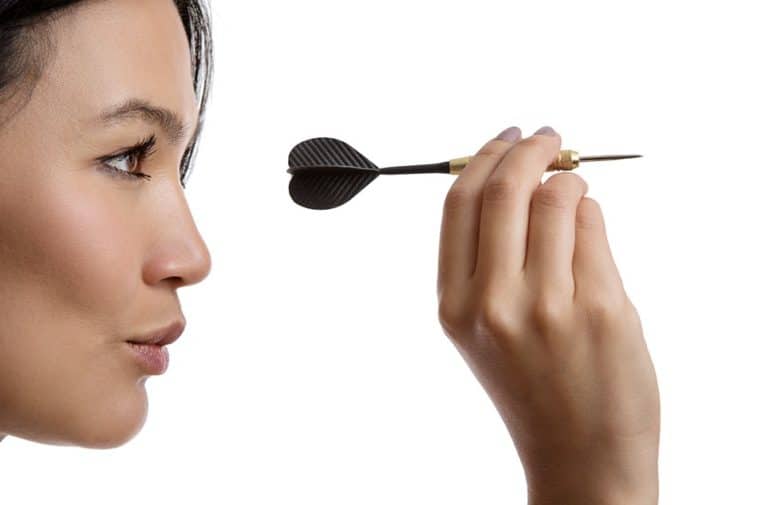 These are women who have paved the way for the next generations of young athletes by shining in our favorite sport. Where are they from, what have they achieved?

Blood, sweat, and tears. But also unbridled joy, plenty of awards, and glory. That is what the stories of these female dart players have in common. They gave it their all to achieve their dream of climbing to the top and becoming the greatest of their generation.

Lisa Ashton is a four-time women’s world darts champion; however, her titles are not what truly sets her apart. Ms. Ashton is best known for achieving a historic milestone: this Englishwoman of 51, was the first woman ever to qualify for the PDC, a major tour that up until then was men only.

Despite the rapid and brilliant growth of women in darts over the last few years, Ashton takes her feat philosophically, and with great elegance. She’s been on record saying that she does not want or expect special treatment.

And we wholeheartedly agree. Lisa Ashton, should not be looked at as the first woman to play on this prestigious men’s tour. No, Lisa Ashton, is too good for that. Lisa Ashton should be known as one of the world’s elite of the sport. After all, she has 10 World Championship appearances in as many years, including a bunch of other Cups, Classics, and Series.

I’ve been following this game for many, many years, and I can’t remember a more unrestrained celebration than the one I witnessed at London’s Alexandra Palace on a Saturday back in 2019 when Fallon Sherrock defeated Ted Evetts during the first round of the PDC World Championships.

Just like that, the shy, 25-year-old English hairdresser from Milton Keynes created a seismic shockwave in the sport and became a household. Sherrock blew up on social media and was quickly invited to appear in the country’s biggest morning talk shows, radio programs, and countless newspaper and magazine articles sprung up highlighting her historic achievement.

She followed her first-round victory with another win, this time against the number one Austrian, Mensur Suljović. Although Sherrock eventually lost to Chris Dobey in the third round of the competition, everyone was already comparing her achievement to that of Billie Jean King.

Born in 1994, Fallon Sherrock grew up in a family of darts players. Both of her parents, as well as her sister, were avid players. Fallon is a champion in every sense of the word. After giving birth a few years ago, she was diagnosed with kidney disease, yet she somehow kept throwing through medication and doctor’s appointments.

She entered the England youth team and was proclaimed world champion in 2011 at the age of 17. Ever since she has been winning titles left and right.

Dobromyslova is 36 years old, and she has been playing for a long time. It is no wonder, then, that she has achieved as many milestones as she has over her long, storied career.

Anastasia dominated the world of darts in her homeland of Russia. In fact, by the time she entered the mainstream darts scene, she was already a 7-time national champion and two times WDF Europe Youth Cup winner.

Since 2004, Dobromyslova has been kicking ass and taking names. She is now a three times BDO World Championship winner and a three times Finder Masters winner. She also has a World Masters title, and a World Darts Trophy title.

As if that weren’t enough, Dobromyslova has also had some brilliant runs in the PDC premier events, such as the World Championship, Grand Slam, and UK open.

She has about 34 tournament wins across Europe.

The year is 2019 and Japan’s Mikuru Suzuki is busy making history in the PDC World Darts Championship by playing against Britain’s James Richardson and nearly beating him.

The match started fairly lopsided in favor of the great Richardson after he opened with a 2-0 lead. However, with the help of a rabid and supportive fan base, the Japanese female dart player managed what few people thought possible, tying the match to 2-2, and taking it to the final round.

Suzuki came surprisingly close to being the first woman to win a match at this event, the most prestigious of tournaments, held at the Alexandra Palace. Unfortunately for Suzuki, Richardson prevailed and won the last match, finalizing the score card to a 3-2 tally.

After the defeat, Suzuki thanked all of her proud fans for their encouragement and support and gave us a glimpse of her inspiring nature. Suzuki said, “It is very difficult to win in this competition, I have not been lucky, but who knows next time.”

Suzuki was ranked #7 by the BDO when they shut down and is a two-time, back-to-back BDO World Champion!

Next in line, we find Ms. Beau Graves who, despite having only one BDO Finals under her belt, managed to quickly establish herself as one of the strongest forces in the world of woman’s darts.

Beau Greaves started to wow fans back in 2014 when she finished runner-up in the female World Masters, one of the longest-running and most prestigious tournaments in the world of professional darts. She repeated the feat in 2016, cementing her in the eyes of many a well-earned place as one of this generation’s top dart players.

However, it wasn’t until 2019 that Beau truly had a standout year, qualifying for the World Championships as a 6th seed. Even though she did not win that year, Beau, who is now the youngest woman player to play the tournament, put up a fantastic show of skill when she beat out fan-favorites Aileen de Graaf and Tori Kewish.

Once I’m done listing all of Lorraine Winstanley’s achievements you will not believe that she is not even a full-time player and that she actually has a successful career as a beautician.

While she doesn’t quite have as many wins as other names on this list, Winstanley has gotten a few impressive notches under her belt in a very short period. For one, she has already won the BDO World Masters in 2017, as well as a couple of runner-up finishes in the 2018 and 2019 World Championship and World Darts Trophy, respectively.

Considering that she also has about 10 or so high-profile tournament wins, you know that Lorraine Winstanley is a name to keep an eye on in the coming years.

Next on the list is in my humble opinion one of the true pioneers of women darts.

Deta Hedman is a near-legendary figure in the world of women’s darts. Born in Jamaica in 1959, she fell in love with darts when her parents relocated to the UK in the 1970s. She joined her first super league in 1984 at the age of 25, and it only took her about three years before starting her British Darts Organisation career in 1987.

Since then, she has made history over and over again. Under her belt, we will find two World Masters and two Finder Masters wins, as well as a few runner-up finishes in the World Championship and the World Darts Trophy. Oh, and did we mention she has more than 100 tournament wins in total?

Deta Hedman is truly an inspiration for all!

We simply cannot talk about the best female players without talking about a few more names. These are ladies that while not currently at the top of the rankings, have proved more than enough to engrave their names in the sport’s higher echelons.

Part of the Dutch National Team, Aileen de Graaf has been playing the BDO and WDF circuits with regular top spot finishes. Most notably, a World Masters and a World Darts Trophy win in 2015 and 2017 respectively.

Laura Turner, the spouse of Surrey’s own Aron Turner, has won a couple of big women’s tournaments, as well as making it to the Quarter Finals in 2020’s BDO World Championship. It is still too early in her career to know if Ms. Turner has the same mettle as some of the other names on this list, but in my opinion, she is worth keeping an eye on.

As darts continues to grow and gain popularity we will see more and more women join the ranks. And thank goodness for that, because if the women on this list are the beginning, I can’t wait to see what the new generations can achieve!