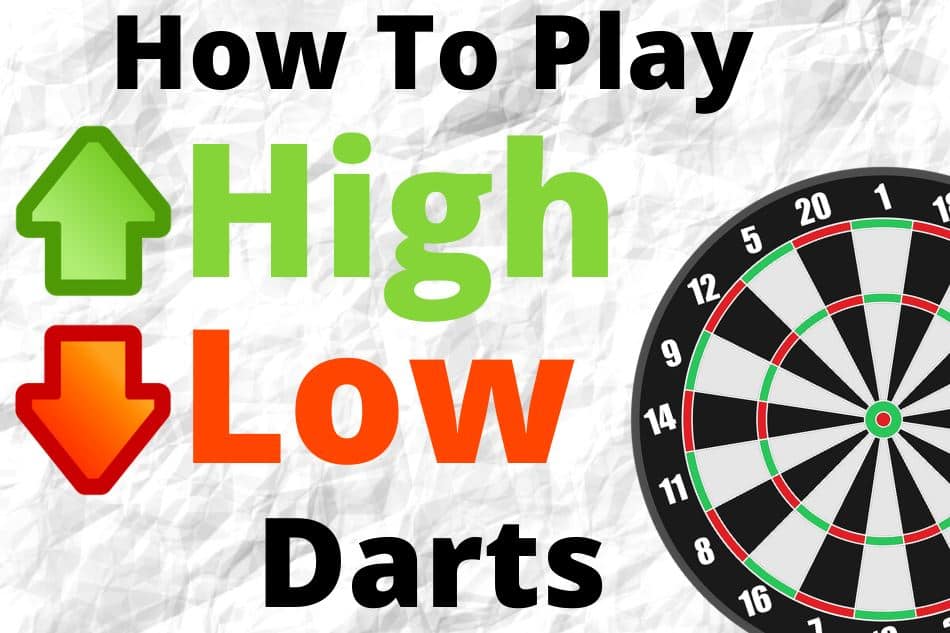 High and Low are actually two different dart games with very similar rules. High or Low refers to if the players should be shooting for a higher or lower number than the target score.

While the lower version of the games has slightly different rules, the premise is the same. High / Low Darts is a fun game that can be played by any number of players.

Once the playing order is determined, the first player will throw two of their darts at the board, at the same time (Yes two darts in one throw). The sum of the two darts will be the starting number and should be marked on the board. That player’s turn is now over.  If a dart misses the board it is counted as zero.

The next player now gets to use all three of their darts (one at a time now) to try to get higher than the target score (equal does not count). If they fail to score a higher total, they lose a “life”.

Regardless if the player was able to score higher or not, whatever score that player gets now becomes the new target score. So there will be a different target every round.

If a player loses all three of their lives, they are out. Gameplay continues until there is only one player remaining with lives.

Lower starts off the same way as Higher, with the first player setting the target score by throwing two of their darts at the board at the same time.

The next player will then throw their three darts but must try to keep their score below the target score.

This is where things change a bit.

In Lower, the center bull is now worth -50 and outer bull -25, And if you miss the board, you score +25. So there will be no missing on purpose.

Once again the target score for each round is set by the total of the previous round and gameplay continues until only one player remains.

The scores can go into negative, and the game becomes a race for bullseyes, with the penalty for missing set high.

Once the target score is determined, it should be written at the top of the board. You will need to erase and update this number after each round.

If a player fails to score higher (or lower) than the target number you will erase one of the markers beside their name. If they lose all 3, they are out of rotation for that game.

I just start all players at zero and add a line every time they miss. I find marking is better than erasing. I also tally up to five, not 3.

Don’t just be concerned with getting higher or lower than the target score. Remember, your score sets the pace for the next round. The harder you make it for them the better your chance of winning.

If you beat the target score by 1 point, you get a life back. This allows players to make a comeback and can prevent people from shooting a 170 when they only need 50. But it can also have consequences if you miss.