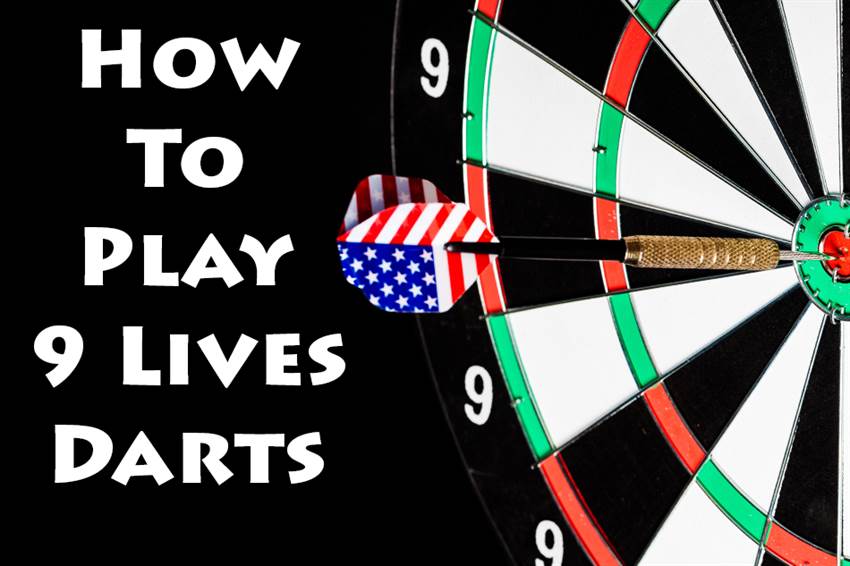 Nine Lives darts is an elimination-style variation of around the clock. Nine Lives can be played with any number of players and is good for players who like to play around the clock but are looking for a bigger challenge.

The funny thing about 9 lives is you actually only get 3 lives. I have not seen any concrete evidence on how this game got its name. There are theories ranging from multiplying the number of darts per life, to it only being made for 3 players.  Who knows, maybe it has something to do with cats?

It is a fun game to play with larger groups and I have included some of my own variations to make it more or less challenging depending on your skill level. So, let’s take a look at Nine Lives.

Nine Lives Dart is played exactly like around the clock but if you miss scoring on a target with all 3 of your darts, you lose a “life”

Once the order is determined, The first player will try to hit the number one on the board. If they succeeded with any of their three darts, they are now on the number two.

If the player hits the one with their first dart, they can use their remaining darts to go for the two (and the number three if they hit the two with their second dart.)

Once the first player has thrown three darts, their turn is over and It is then the next players turn to do the same. This continues until one of the players reaches and hits the 20 to win the game.

During each round, a player needs only to hit one scoring dart to be exempt from losing a life.

For example, if you hit a one with your first dart, and you miss the two with your remaining darts, you do not lose a life. Your turn is simply over and you will continue on the next round from where you left off.

If at any point a player misses a number with their three darts, one of the lives is removed from that players’ scoreboard. If a player loses all three lives, they are out of the game.

Tip: Because you can move ahead up to 3 spots per round, it is possible for a good player to finish a game in as little as 7 rounds.

Scoring for Nine Lives is simple. You just write the name of each player across the top of the board and mark three lines ( I I I ) underneath each name. If a player loses a life, you will erase one of the lives under there name.

This continues until there is only one player left with lives remaining or a player has made it all the way around the board and closed off the 20 segment.

If you are playing with more than just one or two players, you may find it easier to write the names down the side of the board with the lives beside to provide more room.

There are no benefits of hitting doubles or triples so don’t try to get fancy. Aim for the largest part of the singles section.

As an incentive for consistency, you can play so that if a player hits all three darts into the correct segment they gain an extra life.

For a more challenging version of the game, you can play so that if the correct number is hit with the first or second dart, the player may decide whether or not they want to continue, but they must close the next number out with their remaining dart/darts or a life is lost.

You can make the game continue when a player loses all of their lives, instead of being out, they just have to start back at one with full lives. This works well if you have several players so nobody feels left out.