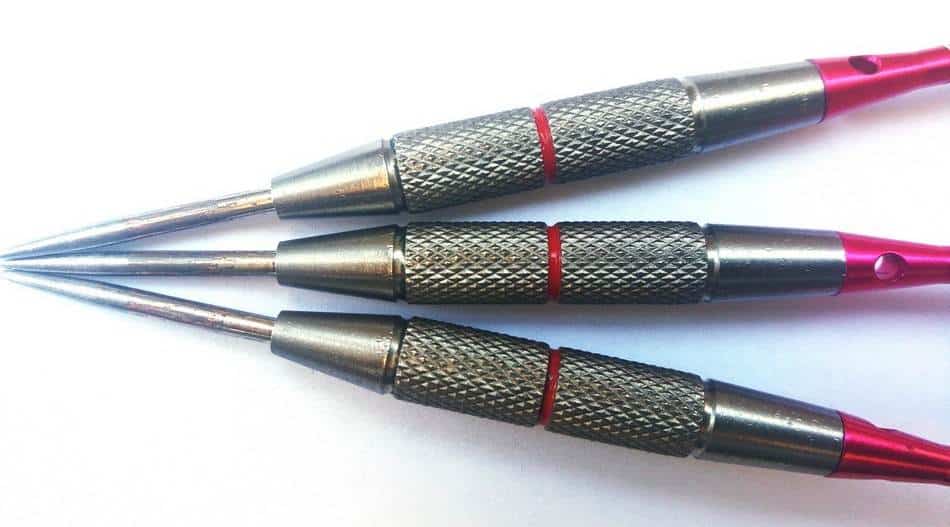 A dart’s point, barrel, shaft, and flight can all be made out of various materials, each with different advantages and disadvantages. There are over 90 metals in the periodic table and perhaps hundreds of metal alloys known to man, yet most darts are made of tungsten. Why are darts made of tungsten?

Tungsten is used to make darts because it is a dense metal. The more tungsten a dart barrel has, the smaller it can be made without sacrificing weight. The higher the tungsten content, the higher the quality of the dart. The most commonly used alloys are anywhere between 80% and 90% tungsten.

Tungsten darts will be more durable, offer a more extensive range of machine knurling patterns that provide better grip with less potential for slipping, and over time, make you a better darts player.

The Perfect Metal For A Dart

The first darts used to play the modern game of darts were made out of wood. With time, brass became the norm, and it stayed that way for decades.

However, the technological advances of the latter half of the 20th century allowed dart manufactures to experiment with different metals and alloys. Once they arrived at tungsten, there was little reason to continue searching further.

Tungsten gets its name from the Swedish language words for heavy and stone, and the 74th element of the periodic table wears its name well.

Tungsten, also known as wolfram, is a somewhat scarce metal of steel gray color with some unique characteristics. For example, Tungsten has the highest melting point of all known minerals and the highest boiling point of all of the existing elements.

Because of its industrial applications, which include uses in the fields of electronics, armaments, nuclear physics, medicine, and various others, tungsten is near the top of the list of most coveted metal products known.

This metal is considered so important that, by law, the United States Government must guarantee a 6-month supply of tungsten at all times. Without tungsten and its many alloys, modern society would look far different.

One of the most defining characteristics of tungsten metal and its alloys is its density. Tungsten density is almost twice that of lead and is comparable to that of uranium.

Check out these > Cuesoul 95% Tungsten Steel Tip Darts < from Amazon.

For those of you who do not remember your high school science lessons, density is a function of mass and volume; which means that a substance with a high-density value can have a smaller size while maintaining the same mass.

In laymen’s terms, if you have two objects of equal weight but with different densities, the denser object will also be the smaller.

The Importance Of Dart Weight

The introduction of tungsten darts revolutionized the game, and this is not an exaggeration. Tungsten darts allowed two mutually interrelated things to happen. As darts became smaller, they also became heavier, and heavier darts radically improved player’s scores!

A tungsten dart, being heavier than a brass or plastic dart, will fly through the air in a straighter line and with more force; which means bounce outs are less likely to happen. Therefore, heavier darts provided players with more control during the throw and made tighter grouping more likely.

Anyone that knows about the intricacies of darts scoring systems will tell you about the importance of being able to place darts in tight groups consistently.

Tight groupings are necessary to be able to hit doubles and triples. In fact, tight grouping is so essential that beginners are often told to prioritize grouping during practice over higher scores.

This means that if a beginner hits a 7 with their first dart, they should attempt to hit two more 7s instead of another attempt at the 20.

Being able to place darts in tight groups consistently will make you an overall more balanced player of the game. Not being able to hit 180s all the time is not so bad when you can knock down a checkout on demand and hit doubles all the time.

A game of darts can quickly become a general accuracy challenge; this is in contrast to the common belief that darts is all about pounding a triple 20.

Tungsten darts are not a one size fit all affair; there are quite a few options when it comes to choosing to purchase a tungsten dart. Because of the chemical properties of the metal and various practical reasons during manufacture, darts made of tungsten are not 100% pure.

Heavy metal alloys made of tungsten and nickel are used: with nickel-iron and nickel-copper matrices being the most common.

Some people will say that tungsten darts should not be recommended to beginners and that only advanced players and professionals benefit from the added control; however, anyone who is serious about getting better at the game should invest in tungsten darts from the get-go.

Even though tungsten darts are more costly to make and therefore a more expensive purchase, the benefits that this most important of metals provides cannot be easily dismissed.

Check out our recommendation for best beginner darts here (Yes they are tungsten darts).