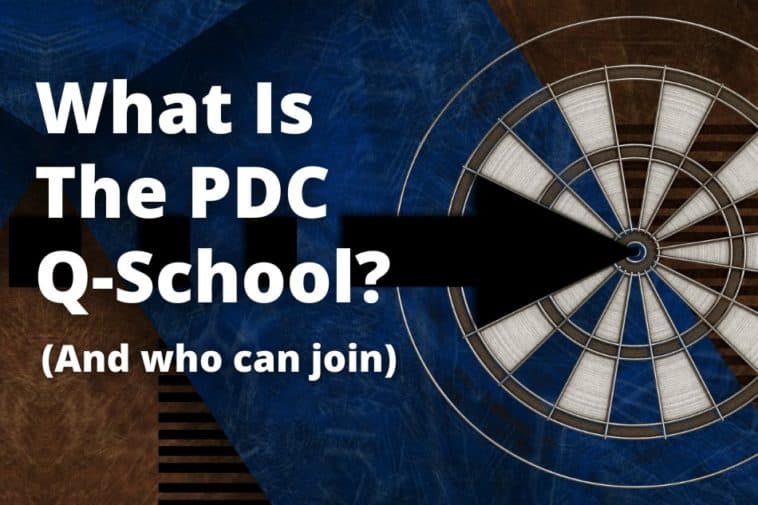 The Professional Darts Association, or PDC as it is more commonly known, holds coveted player rankings, awards the sport’s highest honors, and oversees the world’s major darts tournaments and competitions.

One of the most popular, highly anticipated, and exciting of these tournaments is the PDC Qualifying School.

What is the PDC Qualifying School?

The PDC Qualifying School is an important event in the world of darts where just about everyone, including amateur dart players, can compete to qualify for a spot on the professional PDC Tour and a chance to earn the sport’s top prizes.

But what makes this tournament so special?

Follow me after the break to learn more about what the PDC Qualifying School is and how it works!

History Of The PDC Qualifying School

The PDC Qualifying School was created by the PDC in 2011 following that year’s World Championship. Since then, the Q-School, as it is commonly called, has served as an opportunity for amateur players and former ranking professionals to gain the ability to compete at the professional level of play for the next two years.

The Q-School is held over a few days every January, and the top performers are awarded what is known as a Tour Card, which entitles Tour Cardholders to compete in all player championships and open qualifiers.

When And Where is Q-School Held?

The Q-School is held at the beginning of each calendar year over a 4 day period. Due to the increasing popularity of the competition, and the sport itself, the Q-School is now held in two different locations:

It is worthy of note that players coming from outside the European continent can choose in which Q-School they’d like to compete.

The qualifying process behind Q-School is rather complex; however, I’ll do my best to explain it in straightforward terms.

Here Is How the PDC Qualifying School Works

32 players are exempt from the Final Stage in the UK Q-School and 19 players from the European Q-School. These players are chosen based on which players lost their Tour Cards the previous year, and the top 8 players from each region’s Challenge and Development Tours.

All other players play through a preliminary round that is used to allocate the remaining spots for the Final Stage. Only 8 players per day are able to make this jump from the First Stage to the Final Stage.

All further places are awarded to players from the First Stage Order of Merit held in each region.

The Final Stage offers participants a chance to win up to 32 Tour Cards, with each daily winner automatically receiving their card. The remaining 24 cards are split between the total participants of both regions.

Who Can Participate in Q-School?

Just about anyone can participate in the PDC Qualifying School, as long as they are 16 years old or older on the date of the opening round of the competition.

Any player who competes in Q-School but does not manage to qualify for a Tour Card will earn the PDPA Associate Member classification, which will allow them to compete in the following events for the year:

No. Even though everyone can sign up for the PDC Qualifying school, it doesn’t mean that the competition is easy pickings. Qualifying School can be a brutal tournament, with some very high-level competitors battling it out for their Tour Card.

Besides amateurs with big dreams and young up-and-coming talent, the PDC Qualifying School is home to a ton of seasoned professionals who lost their Tour Cards by dropping below the top 64 rankings.

This means that for all intents and purposes, the PDC Qualifying School is a tournament with professional-level play. Only the very best players will find success in the Q-School.

Nevertheless, very few other sports provide amateur players a chance as significant as the one accessible to dart players by the PDC Qualifying School.