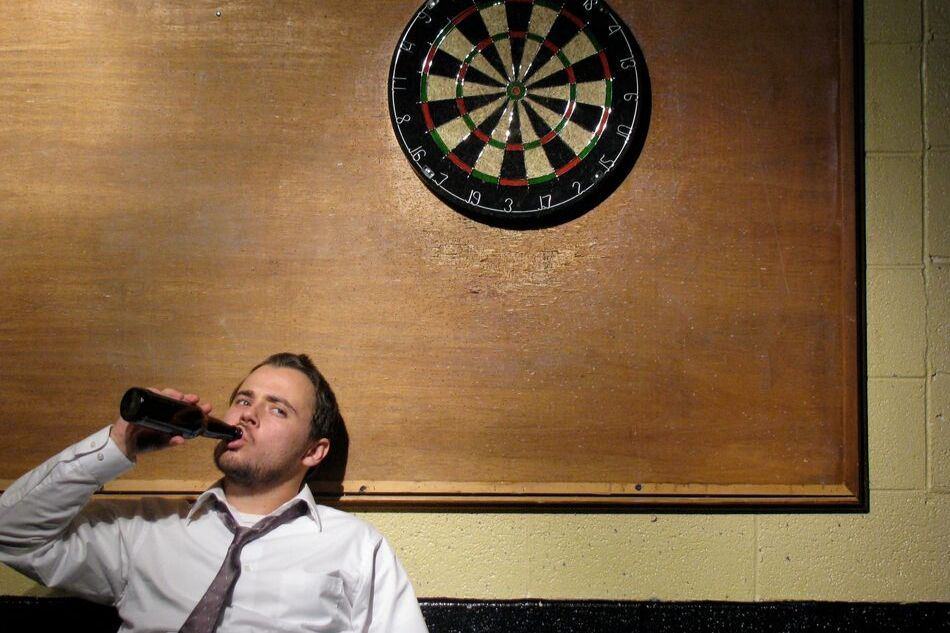 I had a weird dream the other night.

The Summer Olympic games had come to town, and everyone was super excited, but something was off. The great athletes of the world were acting strangely.

The gymnasts were lurching and tumbling, the runners were tripping left and right, a couple of the divers almost drowned, and not one of the archers was able to get their arrows anywhere near the bullseye.

It wasn’t until much later in the day when I remembered why the athletes had all performed so poorly. It wasn’t that they sucked, no; all the Olympians in my dream had been pissed drunk!

What a hoot that would be, wouldn’t it? Drunken sports.

So I got to thinking about how much could one realistically drink and still be able to perform as an athlete at their best. My first conclusion was that it would obviously depend on the sport, but I was pretty certain that being drunk and sports are a bad match.

And then I remembered professional dart Jocky Wilson…and Eric Bristow…and who could forget Andy Fordham!

Could it be? Does drinking alcohol make you a better darts player?

Research shows that drinking alcohol can make you a better darts player. How much alcohol and how much better your darts will be, is something that requires a little more context, and of course it will vary between dart players.

For most, beer and dart playing go hand in hand. The pros of the past were known for being monumental boozers, and yet they stood as some of the best dart players in the long history of the game.

So, if some of darts greatest figures are also its biggest drinkers, there has to be more than meets the eye when it comes to booze and in-game performance.

Before we continue I must say, this article is for informational purposes only. I am not implying that you should go out and get wasted. Booze and steel tip darts can get dangerous for obvious reasons.

Alcohol is addictive and its abuse can ruin lives. If you or somebody know suffers from alcohol abuse there is always help available.

Alcohol Gets A Bad Rap. Seriously Hear Me Out

A quick Google search about liquor and its effect on the human body will net you well over 400 million page results, most of which will espouse the risks and dangers associated with its utilization. This is especially so if you modify the search to include the words “sports performance.”

Everyone knows that alcohol abuse has been linked to countless unfortunate things over the long course of human history. However, the keyword here is “abuse.”

You see, most things can be detrimental to your health if you abuse it. For example, hyperhydration is a dangerous and often fatal condition wherein brain function becomes altered due to drinking too much water.

So, it goes without saying that getting sloshed on the regular is not good, and you might be making some questionable life choices. However, I did some research, and it turns out that there is a growing field of evidence to suggest that moderate alcohol consumption might be beneficial for certain things.

But, what “benefits” of having a beer or two affect your darts? How does that translate into being a great dart player?

Booze Up To Loosen Up

Most of the research I found regarding the positives effects of drinking suggests that moderate indulgence every day reduces the risk of suffering a wide variety of diseases.

For example, some studies indicate that moderate consumption is healthy for the heart.

Additionally, it has been proven that some chemicals found in wine provide clear protection against some types of cancer.

Alcohol has also been linked with anti-inflammatory and anti-aging effects. Furthermore, it has been observed to exert a positive influence on the body’s immune system, and on the process of digestion.

However, the observed benefits do not stop there. In fact, they extend far beyond the scope of the expected and it is here that we might find the answer to our question.

For instance, a recent study published by the science magazine Science News found that if you drink, it can boost creativity and increase mental resourcefulness.

Subjects of the study were able to intuit insightful solutions to tricky word-association problems more often when they consumed a moderate amount of booze.

The conclusion of this study? Moderate consumption of alcoholic drinks can loosen a person’s focus of attention, thus making it easier to make logical connections.

Surprising as well, were the results of a study published by the New England Journal of Medicine, which stated that moderate drinkers have enhanced long-term cognitive function over non-drinkers.

To Drink Or Not To Drink?

As it stands, there is plenty of scientifically-backed data that says that moderate alcohol intake can have health benefits to not only your body but your mind as well.

When it comes to darts, I don’t think many players will argue. A few pints of beer can you a better dart player.

Drinking loosens you up, as anyone who has ever done it can testify. It relaxes you and takes the edge off, especially if you are overly stressed or nervous. So maybe, dart players like Jocky and Andy and Eric used beer to relax and loosen up. Maybe they did it to increase their mental resourcefulness when playing.

To be fair, some of these guys weren’t in any way, shape or form, moderate drinkers. In fact, Andy Fordham said that he would consume so much before games that he could fail a breathalyzer test three days later.

But Andy Fordham and Jocky Wilson and those other guys are some of the best players to ever throw a dart. The rest of us, mere dart mortals of the world, would probably end up in a hospital if we drank as they did.

So what the hell should YOU do next time darts night rolls around?

Well, I say, do as the great ones do.

That is not to say that I think you should go out and get plastered the next time you take a trip to the pub to play a game of darts. If you’ve been paying attention, you must have realized that the key to getting the most out of booze is to keep its consumption moderate.

Every single study, including a seminal one from John Hopkins, which specifically targeted dart players, has concluded that the beneficial effects on the body only occur when drinking is done in moderation. Excess consumption always ends in the same manner: blurred vision, vomiting, loss of consciousness.

There has always been and always will be an association between the pub and darts. For most of us, it is a ritual. You go to the pub, you play darts. Darts is the most popular bar game there is out there.

But if you can’t see straight, forget about playing good darts. You won’t be hitting singles, doubles or triples, of anything. You are far more likely to land a steel tip in the wall or your mate.

Everyone has their personal limits when it comes to tolerance, but for the majority of us, a beer (or beers) will loosen us up, relax us a bit, and rid us of any shaky nerves, which, if you know what you are doing, can translate into playing great darts.