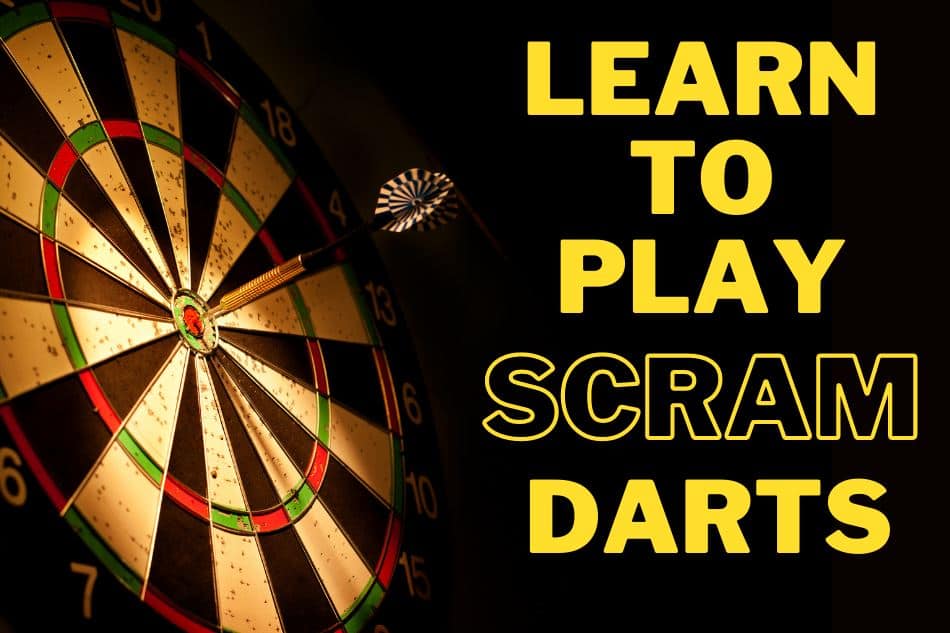 Scram darts is a simple variation of cricket that plays much longer and uses every number on the dartboard.

I actually prefer scram to cricket. To me, it is just more fun, and because it is designed for 2 players, it can be just as competitive.

Of course, If you have more than 2 players there is no problem playing with teams.

It may seem complicated at first as there are different roles for each player, but it is really very simple. I promise Scram will quickly become one of your favorite games. This is how to play scram darts.

In Scram darts there are 2 different positions to play, the “stopper” and the “scorer”. Each player will have the opportunity to play both roles. You can use any method to decide who goes who is who, just remember the stopper goes first.

The stopper shoots first. They will throw their three darts at the board and whichever number they hit is considered “closed” It does not matter if the dart hits the single, double or triple section, the whole number is considered closed to the scorer

Once the stopper has completed their turn, the scorer will then throw their three darts in an attempt to obtain the highest score possible. Doubles and triples do count at full point value for the scorer. Any dart that lands in a segment that has been closed have no point value.

The stopper and scorer continue to take alternating turns until the stopper is able to close out all of the numbers on the dartboard along with the bullseye. Once all numbers on the board are closed, the roles are reversed.

After both players have had the chance to be the scorer, the player with the highest points total is the winner.

Start by marking the players’ names across the top of the board and the numbers from one to twenty (along with a B for the bullseye) down the middle.

You will keep track of everything on the scorers side of the chalkboard.

When the stopper closes a number, you will mark an X beside that number on the scorer’s side.

When the scorer scores, mark the points under their name. Then add their point for each round to their running total as you go.

As involving as it seems, this is still a points game. If you are the stopper, try to close off those high numbers first. If you are the scorer go for the highest open segments, and remember doubles and triples count.

For extended play, you can just wipe the closed numbers away after each round and keep going with the same scores.