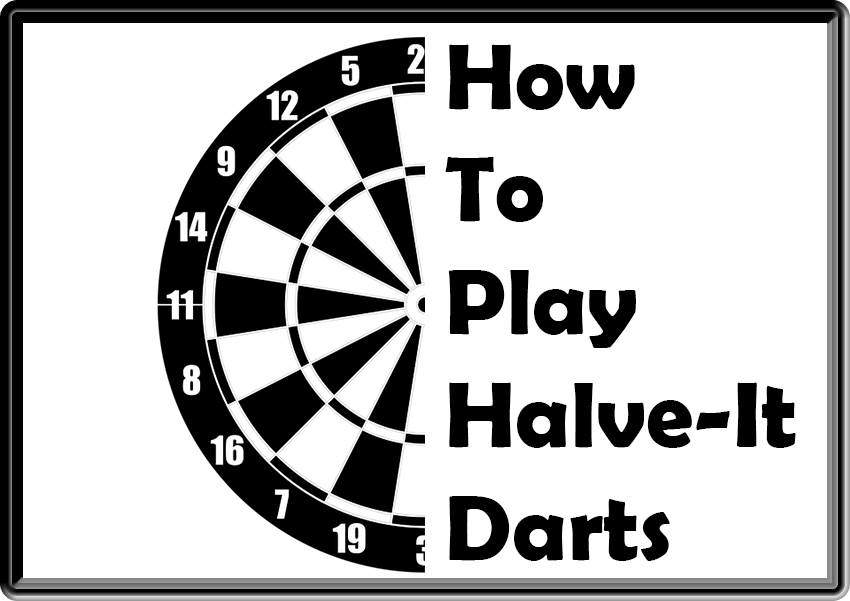 Halve-It (also known as Half-It) gets its name from the point penalty suffered each time a player is unable to hit the established target. However, let’s not get ahead of ourselves, and start from the beginning.

Halve-It is one of the most challenging and punishing dart games there is.
This does not mean that if you are new to the sport, you should stay away from it.

As it stands, newcomers can gain a lot regarding skill and mental acuity from playing a few games of Halve-It every once in a while.

Because you can choose your targets for each round ahead of time, it can be an excellent method for practicing those problem numbers in your game.

Here is all you need to know to get started.

Halve-It can be played one on one, or in groups, or multiple single players.

All players must agree on the number of rounds to be played and on the assigned target for each round.

In the first round, players will throw three darts at the board to set their starting scores. The higher the starting score, the better.

Each round after that players will have three dart throws to hit the previously determined target for the round. Only the target number for that round counts towards scoring. Scoring is standard, with doubles worth 2x the target number and triples 3x.

If a player is unable to hit the established target for the round with at least one of his dart throws, his accumulated score is cut in half.

Once all players have taken their three dart throws, the round is over, and the target number changes.

At the end of the last round, the player or team with the most points wins.

The easiest way to play is to choose a few numbers like 20,19,18,17,16. As you get used to the game, there are plenty of variations you can throw into the mix to make things more interesting.

For example, you can choose a color on the board, hit any double or treble, inner or outer bulls, hurdles (hit any number, skip the number beside it then hit the next number). The options keep things fresh and make your game different every time you play.

How To Score Halve-It Darts

Down the left side of the scoreboard or chalkboard, you need to write the agreed upon targets for each round. Then across the top write the names of each participant or group of players.

For each round, you will add up the total score for the current round and add it to his or her running total. If playing with teams, all of the player’s scores are added to the total.

Scores are cumulative, so for each round players will carry over their previous high score. Remember that if a player fails to hit the established target, his or her score for the next round must be halved.

Halve-It is a game that requires a fair amount of accuracy from players, and as such, being an accurate thrower is essential.

Mistakes are costly in Halve-It; remember that every time you mess up, you lose HALF your total accumulated score. So being able to remain calm even when you have already missed your target on your first two throws will become crucial to your success.

If you are going to make a mistake, make it early and don´t worry if you fall behind because at any one time any player can lose half their score allowing plenty of chances for catching up.