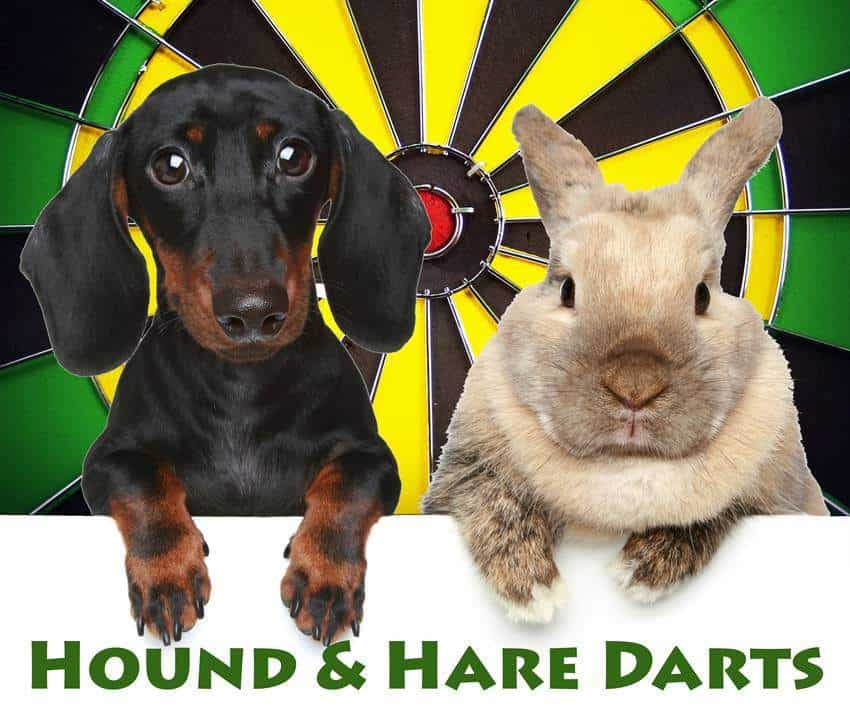 It never ceases to amaze me just how flexible the game of darts is. The basic premise could not be any more straightforward: you throw darts at the dartboard and attempt to get a higher score than your opponent.

Even tournament play, which is quite a bit more nuanced, is still played by following this basic premise. However, if you sit down to make a list of all the possible rule variations and game variants, you are going to be sitting there for a long time.

Today we are going to talk about one of the lesser-known dart variants; a little game called Hare and Hound. This game shares its namesake with a classic outdoor chasing game, this is still a game of darts to the core.

The objective of the game varies depending on which role you have been assigned.

If you are playing as the Hare, your objective is to go around the dartboard before the Hound player catches up to you.

If you are playing as the Hound, your objective is to trap the Hare, and you do this by catching up and subsequently passing them.

Hare & Hound is an asymmetrical game, meaning players are not given equal starting points. To establish tension and ensure that the game retains a sense of forwarding momentum, the Hare starts the game on the 20, and the Hound begins the chase one spot to the left, on the 5.

Players take alternating turns throwing a predetermined number of darts. You can only advance to a new spot on the board if you land a dart on the preceding section during your turn.

Both players move in a clockwise direction around the board.

The game is over when the Hare completes a full lap around the board and lands on the 20 again, or when the Hound catches up to the Hare.

Hare & Hound is one of the simplest dart variants to score because its winning condition is binary. Either the Hound catches the Hare, or it doesn’t. Therefore, there is no conventional score.

Players only ever have to be aware of the last number section they played.

Because the chase occurs in a clockwise direction, players do not have to follow a sequential number order, but instead, follow the order of the numbers around the board.

Hare & Hound is a game that is at its best when played by two players of equal, or comparable, skill. Otherwise, it can be quite frustrating for the less experienced player. After all, there is no fun to be had if the chase is an illusion, and you know that the Hound will always win.

In cases where there is a noticeable skill gap between players, there are a couple of changes you can make to even the odds. For example, give the less experienced player three darts per turn while providing the more experienced player only one throw.

Furthermore, if the less experienced player is playing as the Hare, you can start the Hound much further back than the number 5 position. For example, beginning the Hound on the number 9 position will give the Hare a three turn head start.

Another smart variation you can apply to your games of Hare & Hound is to handicap the winning player during consecutive rounds. For example, if the Hound manages to catch and capture the Hare on the first round, mark and make a note of the position the Hare was in when it lost. For the next round, the Hound, now playing as the Hare, will have to get further than the mark to win.

For a more challenging game, you can choose to make doubles or triples a requirement. As in, you can only move to the next section of the board after hitting a double or triple.

The game can also be played with more than two players. You can set it up, so one player is the hound, and all others are the hare, If a hare is caught, they are eliminated, but the game continues for the other players.