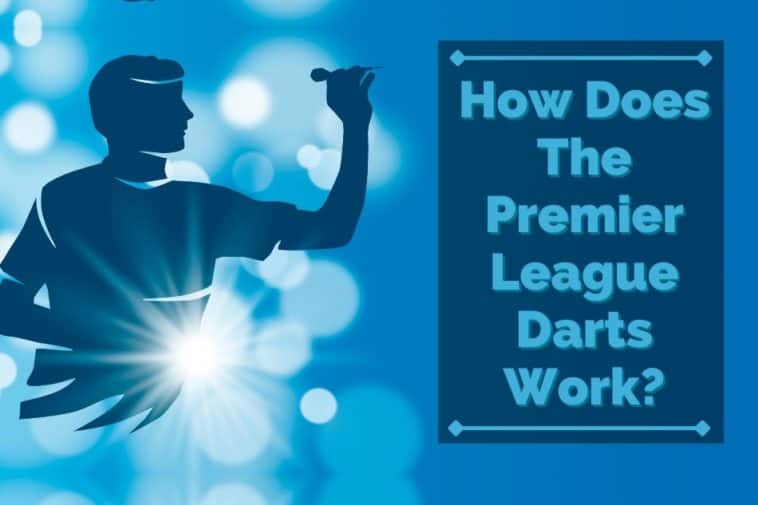 The Premier League Darts is one of the world’s most important and most popular professional darts tournaments.

Held annually by the Professional Darts Corporation, the Premier League has gone through some change since its inception in 2005. However, starting with the 2022 season, the tourney will feature what is arguably the most radical change in its history.

So, regardless of whether you are a fan of the league or a newcomer to the game, you are probably asking yourself,

How Does The Premier League Darts Work?

Starting with the 2022 season, the Premier League Darts uses an 8-player nightly knockout bracket format, with each dart match played over the best of 11 legs, for a total of 16 events.

Each night’s winner will also now receive an additional £10,000 bonus towards their final prize takeaway, which now tops at £1,000,000!

This is the basic format, but for a more detailed breakdown of exactly how the Premier League works, and how it differs from its previous incarnations, let’s take a look.

The inaugural version of the Premier League Darts was launched on January 20th, 2005 on Sky Sports as a complimentary tournament to the highly famous and favored PDC World Championships.

Given that Sky Sports holds the video broadcast rights to what is, arguably, the best football league in the world, the network decided on using a similar naming convention for what it hoped would be the new standard in the professional darts world.

While this latest iteration of the tournament is perhaps the most radically innovative, over its 18-year history, the Premier League Darts has undergone a few format changes along the way, including a varying number of competitors, as well as extra challengers.

Prior to this latest format, the Premier League Darts in 2021 used a more traditional round-robin format, in which players played a fixture list of 10 players to earn league-style table points. However, the 2019 and 2020 versions of the tournament featured 9 fixed players and new guest challenger players would compete each week.

The fact that the format has once again changed does not surprise fans or players. However, it does generate tons of excitement and anticipation.

In most previous iterations of the league, each competing player would take the stage to face each other once in the initial 9 weeks of the tournament, before the two lowest ranking players were eliminated. This left the remaining 8 to whittle each other down until the top two squared off in the Grand Finals.

To start with, the competitor pool is smaller.

Secondly, all players are guaranteed to face each other once during the initial 7 weeks of the tournament, and then again once more during the quarterfinals round held on the 15th week.

On each night the participating players will receive 2 points for fourth and third place wins, 3 points for second, and 5 points for winning first place. Weeks 8 and 16 determine the league draw based on the standings at the time.

Then the top players fight it off in two knockout-style semi-finals, where 1st place plays 4th, and second place plays the player in 3rd.

How Much Do Dart Players Earn In The Premier League?

This year’s matches will be played across the United Kingdom, Ireland, the Netherlands, and Germany.

How Are The Premier League Darts Players Chosen?

The pool of players that have historically played the Premier League Darts has been pretty consistent, with some names coming up over and over again through the years.

While the old formats typically chose the four top players in the Professional Darts Corporation Order of Merit, to play against 6 invited players, the new format will pick the top 6 players in the PDC Order of Merit and pit them against the Reigning Champion and the winner of the PDC Masters Tournament.

Who is playing in the Premier League Darts this year?

The 2022 Premier League Darts tournament will feature the following players:

Why Does The Premier League Change Formats?

The Premier League Darts has undergone many changes throughout the years, but each time the changes have translated to significant growth in audience size and popularity.

While the league now stands in a different category than it did at the beginning of its history, PDC organizers do not want to sit on their laurels. They are constantly looking to innovate and break new ground.

The newest change to the format has a singular aim, and that is to make every single match count. In other words, with the new 8-player knockout bracket, each night of the competition will see a new winner.

Additionally, the new format means that the Play-Off race is much more nuanced, with a less predictable outcome. This directly translates to higher stakes and more exciting and engaging experiences for audiences everywhere.

Where Can You Watch The Premier League Darts?

With each passing year, as the tournament grows in popularity, the Premier League Darts nights gain more TV exposure.

This is fantastic news for us fans who are unable to attend the live games.

As always, Sky Sports broadcasts all weekly matches in the United Kingdom.

In the United States and Canada, you can catch Premier League Darts action on OLN, or through sports streaming service DAZN.

In Germany, Sports1 will be your go-to for broadcasts of the Premier League Darts matches.

If you live down under, then your options are Fox Sports or Kayo sports.

As always, feel free to check out https://www.pdc.tv/tournament/cazoo-premier-league, for more information.