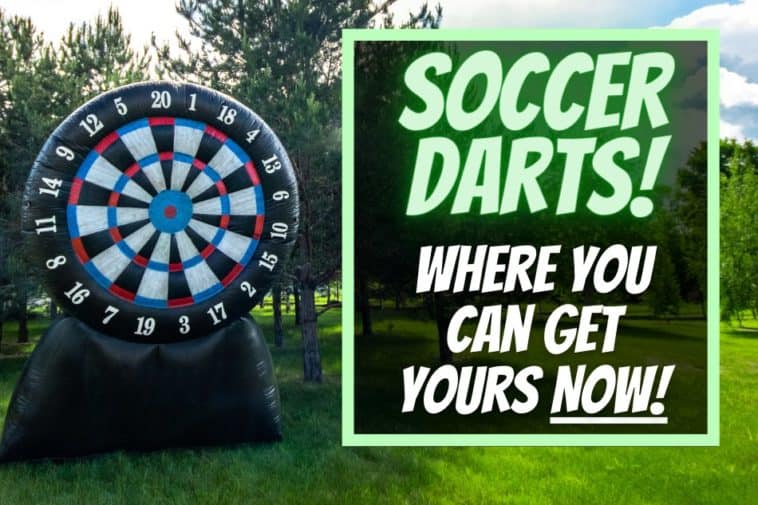 Some things in life are a perfect match: peanut butter and jelly, bacon and eggs, Bonnie and Clyde, etc. Some combinations, however, leave a lot to be desired; for example, chocolate and sardines, milk and vinegar, rain and tennis. And I’m pretty sure that most of you would feel comfortable adding the words inflatable and darts to that list.

Well, I’m here to tell you that inflatable darts are a thing (kinda), and it is one of the most fun games you can play this summer.

This is Inflatable Soccer Darts!

What are Inflatable Soccer Darts?

Soccer Darts is a fun outdoor game that combines the balls of soccer with the target of darts by having players take aim at a giant inflatable dartboard!

Believe it or not, inflatable soccer darts is a pretty darned accurate description of the game. With soccer darts, what you hear is what you get: the unlikely, but ultimately fun mixture of two of our favorite pastimes!

As you may have already gathered, when you play a game of soccer darts, you don’t throw darts. In fact, you don’t need darts to play this game. What you need are a special soccer ball and a giant inflatable dartboard.

You read that right. This game, which is taking the world by storm, is played by kicking your “darts” toward a gigantic board.

How Does Inflatable Soccer Darts Work?

Inflatable Soccer Darts provides players with a framework to change things up, but the basics of the game are virtually the same as in a traditional darts game. The aim here is to score as many points as possible in the smallest number of turns possible.

You can play with the basic rules of 501 or 301. In fact, you can adapt the rules of virtually every dart game to work on a setup of inflatable soccer darts.

The main difference is that you won’t be throwing darts, but instead will be kicking balls. These balls are typically made out of a special material that permits them to stick easily to the velcro-like surface of the dart board.

Speaking of the dart boards, another big difference between traditional darts and the inflatable kinds is the size of the board itself. While a regular dartboard is just over 17 inches in diameter, an inflatable soccer dart board can be as big as 15 feet across by 15 feet in height.

So, after setting up your giant inflatable dartboard, and securing it safely to the ground, your players can play and kick to their heart’s content. If you think this sounds like a good time, then allow me to tell you that it’s all that and more.

I can’t remember ever having as much fun as a grown adult as I did while playing inflatable darts last year. The kids love this game, the excitement starts as soon as they see the setup begin.

When To Play Inflatable Soccer Darts?

This crazy game can be enjoyed by both adults and children, and it is especially fun to play with a mixture of both.

If you need a game to entertain for hours and cause bouts of uncontrolled laughter, soccer darts can fit the bill perfectly.

Of course, the game is best played outdoors, Be mindful of weather conditions such as wind, rain, lightning, and snow. You must also inflate it with air using the electric pump, so make sure there is a good source of power around.

It is safe to play indoors as well, as long as you have the space for the giant board.

Where To Get Inflatable Soccer Darts?

Wondering where to get your hands on one of these bad boys? Well, with the rapidly increasing popularity, inflatable soccer darts are gaining quite the notoriety. As a result, there are now a large number of options available.

These packages include everything you need to start playing such as the inflatable board, plenty of balls, and setup instructions.

Amazon is the best place to grab one of these ready-to-go kits that include everything you need to properly and securely get set up, including the inflatable board, the balls, tethers, etc.

Here are some of our favorites.

If there is one thing I want you to take away from here today is this: the hype is real! Inflatable Soccer Darts are awesome! and you should definitely check the game out.