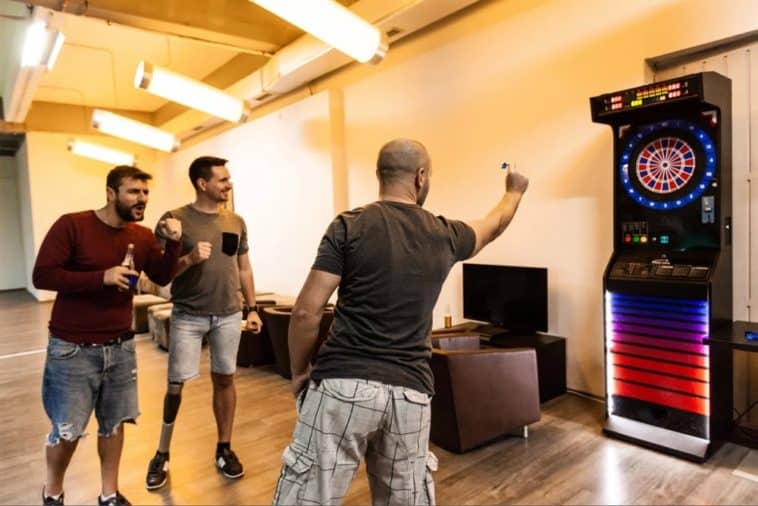 The game of darts is a perfect example of the famous aphorism that says “easy to learn, difficult to master”. This is because the rules are relatively simple, and the entry requirements are rather low: all you need is a dartboard, a few darts, and a measured oche.

The oche, or throw line, is set at the universally recognized distance at which a player must stand when playing regulation darts. This distance, as set by the PDC as well as the British Darts Organization, is 7 feet 9 and ¼ inches.

However, astute players often try to lean over the oche line in an attempt to get an advantage over their opponent. But,

Can You Lean Over The Line In Darts?

Professional tournament play must be played with a raised oche, and the rules state

5.7.3 During a Player’s throw, no Player shall tread on any part of the raised Oche nor shall the Player deliver any dart whilst their feet are in a position other than grounded on the floor behind the toe edge of the raised Oche. Where this section is breached the score from the thrown dart will not count towards the score.

When playing with a marked oche, the rules state that the player must stand in such a way that no part of his or her feet extends beyond the edge of the oche closest to the board. This is done to ensure that all players have equal footing and an even playing field.

But Does Leaning Over The Line Give You An Advantage?

Leaning over the line will shorten the distance to the board; thus, giving the player a theoretical advantage over their competition.

What Happens When You Lean Over The Line In Darts?

When you lean over the line in darts a couple of things happen that can directly impact your performance.

The first is that the distance between yourself and the dartboard shortens by an amount equal to how far over the line your dart ends up. This means that the dart has less distance to travel through the air once you release it, which can decrease the chance of making a mistake.

The second thing that happens when you lean over the line is that your center of mass changes, which directly impacts your balance. And as any darts player knows, being off balance in the middle of your throw can negatively impact your accuracy and precision.

However, if you can get used to the changes to your balance as you lean over the line, and can change your throwing technique through position adjustments, you may find that your performance improves slightly.

This is what the best players in the pro players do: they lean over the oche line as far as they are comfortable with and make micro-adjustments to their posture and technique to get the best performance possible with every single dart thrown.

As one might expect, taller people with longer limbs will typically get more out of leaning over the line in darts than shorter people with shorter limbs do. This means that some people believe that leaning over the oche is a way to gain an unfair advantage over the competition on the account that it eliminates equal footing.

Is It A Good Idea To Lean Over The Line In Darts?

If you are balanced and comfortable with the stance, it’s probably a good idea to lean over the line, as this will allow you to perform your best. Just remember, that the rules are very clear cut: a player’s foot must not exceed the edge of the oche closest to the board.

In other words, you may step ON the oche line, but no part of your feet may extend beyond the farthest edge unless, of course, you are playing with a raised oche.

The bottom line is that you can lean over the line in darts as long as you follow the rules and keep your feet where they should go. Additionally, you should keep in mind that leaning over can affect your balance and ability to throw your darts accurately. As such, you should only lean forward as much as you can do so while staying in total control of your body and technique.