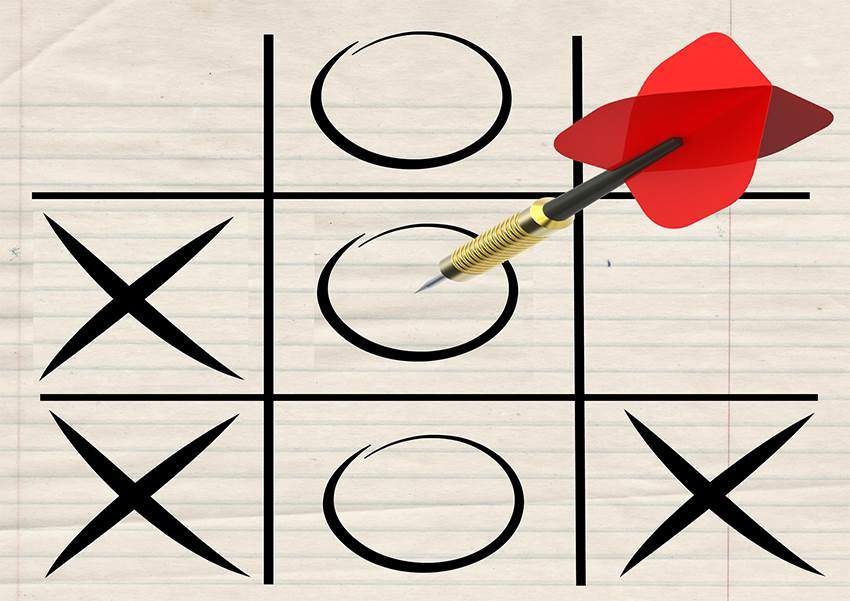 Everyone knows the pen and paper game called tic-tac-toe, after all, most of us are taught it early in life. Well, darts has its own variation and its better!

The rule-set has an initial setup that is a bit more complex than most other games but once started, it will provide fun for players of all experience and skill levels.

Tic-tac-toe darts is perfect for two players, small teams, or larger groups, so if you are on the lookout for a fun and exciting way to spice up your darts game night, try tic-tac-toe!

The initial setup is as follows:

Three standard Tic-Tac-Toe grids are drawn on the board: a small one on each side for the teams to track progress and a large one in the middle where the actual game-play will take place.

Ultimately you want to score three in a row on the main grid. You can do this by closing out a specific number and using the smaller grids to keep track.

Imagine placing a Tic-Tac-Toe grid over the board. Each space on the grid would mostly be filled by a specific number on the board.

The participants proceed to take alternating throws at the corresponding numbers in an attempt to close them out.

Each player has three darts per turn to hit an appropriate target. If a target is hit, a point is marked on the small grid in that section.

The player/team must score a three on any given number before it can be considered closed. Once you have three hits marked for any given section, it earns the throwing player or team a mark on the main game grid.

Tic-Tac-Toe darts is only complicated on initial setup. In principle, it plays exactly like good old tic-tac-toe. This means that players, or opposing teams of players, throw darts at the numbered sections of the board that correspond to the squares of the classic tic-tac-toe grid.

Just like a game of paper tic-tac-toe, the winner is the first to mark a line of three on the main game grid.

Proper scoring will take a bit of initial set up.

The first step is to draw out the game grids on the score sheet or scoreboard.

For the darts version of the game, you need three grids: a large, center grid where you place the markings for the actual tic-tac-toe game, and two smaller ones where you keep track of each player’s scores when closing numbers.

Each time a player takes their turn, they should aim for the scoring numbers exclusively. Any dart that does not hit a target area, or hits an area that has already been closed is not scored.

To keep track of the points scored on the small grid you will use the following method for each number.

Once 3 points are scored on one of the small side boards, they can then mark their X or O on the main board, and that number is out of play.

For example, if in the first round a player hits a treble 7, singe 3, double 2, he can close the number 7 by marking an X with an O around it in the corresponding spot of his small grid (it would be the bottom left corner). Then mark a / in the bottom box for the three scored and an X in the lower right box for the two 2s.

Since the player has closed out 7, he can place either an X or an O in the bottom left corner of the larger game grid.

If the player scores a single or a double, you mark them with either small slash or small x respectively.

Once a player gets 3 in a row on the larger grid, they win.

Just like regular tic-tac-toe, it is possible to have a cats game or a draw. If you are familiar with the game, you should easily see when a game is void. There is no reason to keep playing. Just wipe it down and start fresh.

Not really a variation, but if you are playing with large groups you can split up into many teams and have a full out tournament