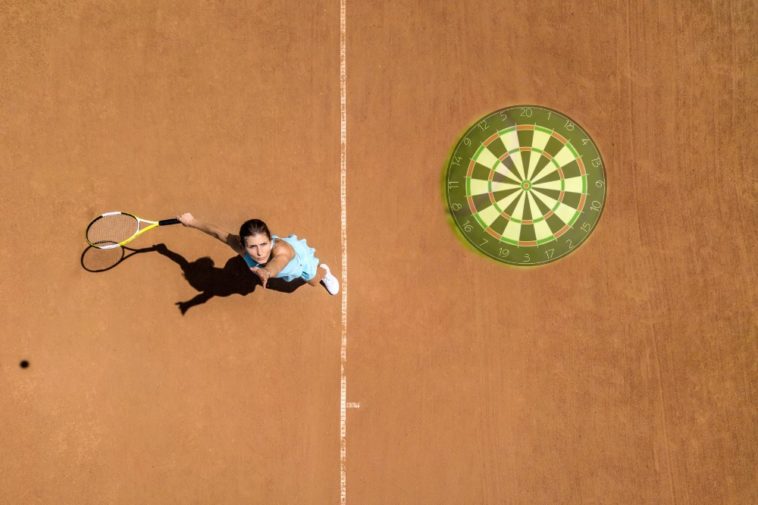 If you are familiar with darts games like Baseball darts, Cricket darts, or Golf darts, it shouldn’t surprise you to learn that there is also Tennis darts. What should surprise you, however, is how well the basic mechanics of a dart game adapt to the rules and structure of a racket sport like tennis.

Tennis Darts is a very easy game to learn and play. However, much like the other games mentioned above, Tennis darts have a very high skill ceiling which gives players plenty of growth opportunities.

So, whether you want to learn the basics of Tennis darts, or you want to deepen your strategic knowledge of this fun game, you are sure to find some useful information in the guide below.

Just like in the racket version of tennis, you can play with 2 people or 4 in a doubles match.

The object of Tennis darts is to win a set. To do so, a player must win the best of 6 service games. In other words, the first player to win 4 Service games wins the set.

And just like in Tennis, play will alternate between the two halves of the board, with each player attempting to score on alternating sides. To score successfully players must follow the same numerical pattern as well, with players aiming to score 15, 30, 40, and then Game.

Let me explain the rules in more detail.

To determine the starting order, each player must throw one dart. The highest score will give that player the status of “server” for the first game. This rule also determines the order of a Set Tiebreak, in case it is needed (more on tiebreakers to come).

The score should be kept on a whiteboard or blackboard, with the name of each player at the top and plenty of space underneath each player’s name for scoring each Service Game.

Numbers 20 and 3 are treated as the “net”. As such, a player who throws their dart in these numbers loses their points. Another way to lose a point is for a player to fail to hit the active side of the board with their first two shots.

The serving player must hit a valid number. This will be the Target Number for the rest of the game. A double on a first dart is considered an “Ace”, which automatically wins the point for the player throwing.

The server will continue to aim for the Target number, attempting to score as many points as possible, with each additional dart adding to the player’s score.

Once the server fails to hit the target number, the play will pass to the second player.

Once a player has scored a point, the play area alternates to the opposite side and the second player becomes the new server.

The players will continue playing until one of them has won the Set by winning 4 Service Games.

Each time a player wins a game, he scores a point. And just like Tennis, the scoring convention is as follows”

In case both players tie with a 40-40 score, known in the Tennis world as a Deuce, a Tiebreak must be played.

How To Score A Tiebreak

The point will go to a Serving player scoring an Ace on their first throw, or whichever player scores more of the target number.

In case both players tie the Set with a score of 3 games each, a Set Tiebreak is played to determine the overall winner. The only difference between a Set Tiebreak and a regular Tiebreak is the fact that the Serving player must win two consecutive points.