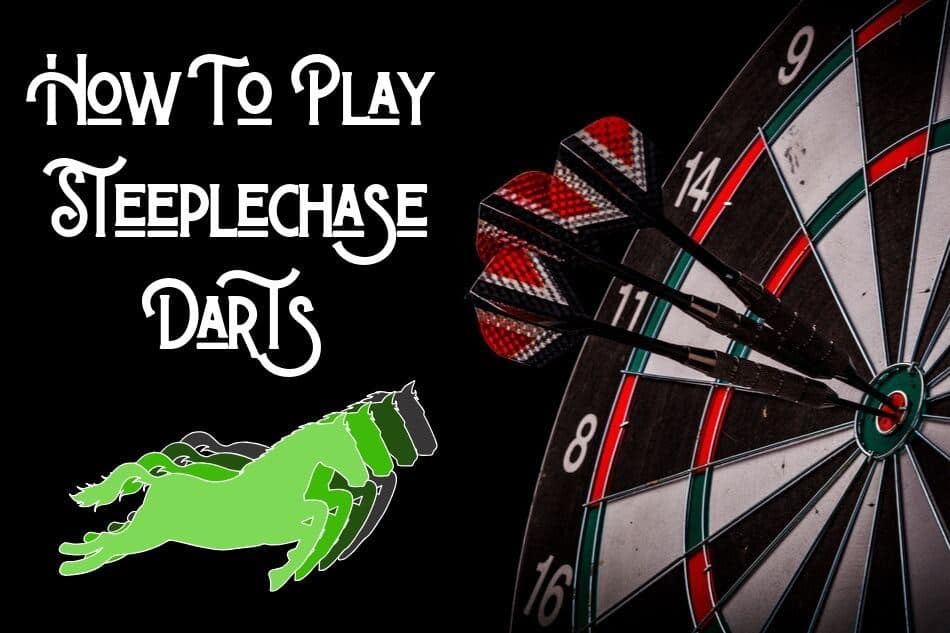 The word steeplechase will mean different things to different people. Originally created as an obstacle course race for horses, it was adapted for humans and is now an Olympic event.

A steeplechase can be loosely defined as any race that involves jumping obstacles But there are no obstacles in darts, and I will not have you jumping. By now you may be wondering, how do you play steeplechase darts?

To play steeplechase darts you must be the first player to work your way around the board, from 20 to 5, then the bullseye. There will be a few spots where you have to hit the triple. These are the “fences”

It plays similar to other around the clock style games. However, in steeplechase you are only able to progress one spot per round. This adds another level to the game as it increases the opportunity for losing players to catch up just like a real race.

The first round starts at 20. In the steeplechase, only the inner singles ring is a valid scoring area. Each player will get three darts to try to hit the inner single 20 section. If they succeed, they move clockwise to the one segment the next round. Then 18, then 4, and so on.

If a player fails to hit the target with their 3 darts, their turn is over and they must try again on that number the next round. They can not move on to the next number until they hit their current target.

It is very important to note that you are only able to proceed one space per round. So even if you hit your target on the first dart, you do not use your other two darts on the next target. Your turn is over and you must wait until the next round to proceed.

Every few numbers you will run into a “fence” Traditionally these are 13, 17, 8, and 5. When you get to these numbers the singles segment is no longer in play. You must hit the triple to proceed.

When it comes to the fences, you only get three rounds to try and make it past. If you fail to hit the triple after 3 rounds, you are out of the race.

Once you get fully around the board and hit the triple 5, you must hit the red bullseye to win the game.

Scoring steeplechase is easy because no scoring is necessary. As long as each player can keep track of what number they are on, you’re good to go. If for some reason you have to mark it, just the player names and their current number is enough

If you are new, you may want to write the fence numbers on the board just so that you remember where they are.

Getting the lead is not helpful if you get stuck on the fences. While most of the game you are aiming at singles, being good at the triples will ensure you can keep progressing,

This may be sneaky but if the people playing are not that great, you may want to let them get to the fence first. If they miss, you win.

The position of the fences can be moved to suit the player. The most common alternative is 6,3, and 11. Which is a little easier to remember as they are at the quarter marks of the race.

There are a few things you can do to make the game easier for newer players such as opening up the full singles section or removing the losing penalty for missing a fence 9 times.

Steeplechase is actually a really fun game that has some unique features not found in other around the board style variation, definitely worth a try.