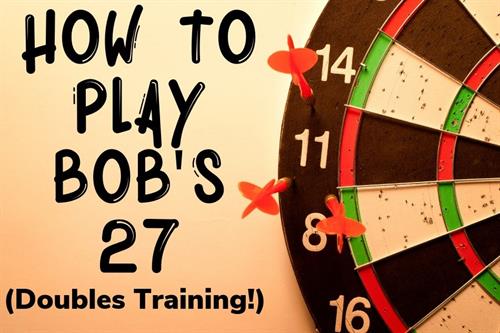 Unless you are planning to go pro, you are probably playing darts for fun. Sure there is a little competition involved whether you are in a pub, league, or just with friends but nothing serious.

One of the most important skills you can learn for 501 or 301 is doubling out. If you need to practice those doubles, its time to learn how to play Bobs 27.

To play Bobs 27 darts you start with a score of 27 points and shoot for doubles in order. If your dart hits a double the points are added to your score. If all 3 darts miss, you subtract the points.

It was invented by dart pro Bob Anderson for the sole purpose of practicing doubles. Not only is it a great practice game, but it is also a great solo game, although you can play with friends.

Each player starts with a score of 27. You will be throwing at a specific double each round starting at 1 and ending at the bull, so there are 21 rounds total.

When shooting, only the doubles count. If you hit the double for that round, the total of its points is added to your score. If you miss, the points are deducted from your score.

If your score gets to zero, your game is over.

There are a couple of ways to score Bobs 27 if you are just playing for general practice, you can keep a running total in your head. Get 6 points in the first round and your score is 33. You just need to remember that for the next round and add your scored points up before removing your darts from the board.

If you are working hard to improve your game, I suggest chalking each round individually.

Mark the numbers 1 to 20 and B down the left side of the board then make 2 columns for each player. One column for the points scored that round and another column to keep a running total.

Why mark it down if you can score it in your head?

To look for weaknesses in your game. After you play a few rounds you may notice you are always missing 4s. Or maybe 4s, 13, and 6s. It should then become clear you are weak on the right side of the board and you can adjust your training accordingly.

The only tip I can give is to record scores as I mentioned above. Knowing where your weaknesses are will help you to improve your game and avoid early finishes.

Your score should always be odd. If you are even, you made a mistake.

Robert Charles “Bob” Anderson is a former World Champion darts player from Winchester, England. Nicknamed The Limestone Cowboy, he was the number one ranked player for most of the late ’80s

Bob won the World Professional Championship in 1988 and was the first darts player to win the Winmau World Masters for three successive years an was one of the players who helped to for the PDC as we know it today.

Shortly after his championships, he took some time off to have surgery for a back issue. He returned to the world of darts and continued to play as a pro for many years later. Bob has appeared in several youtube videos where he gives tips and advice to players of all skill levels