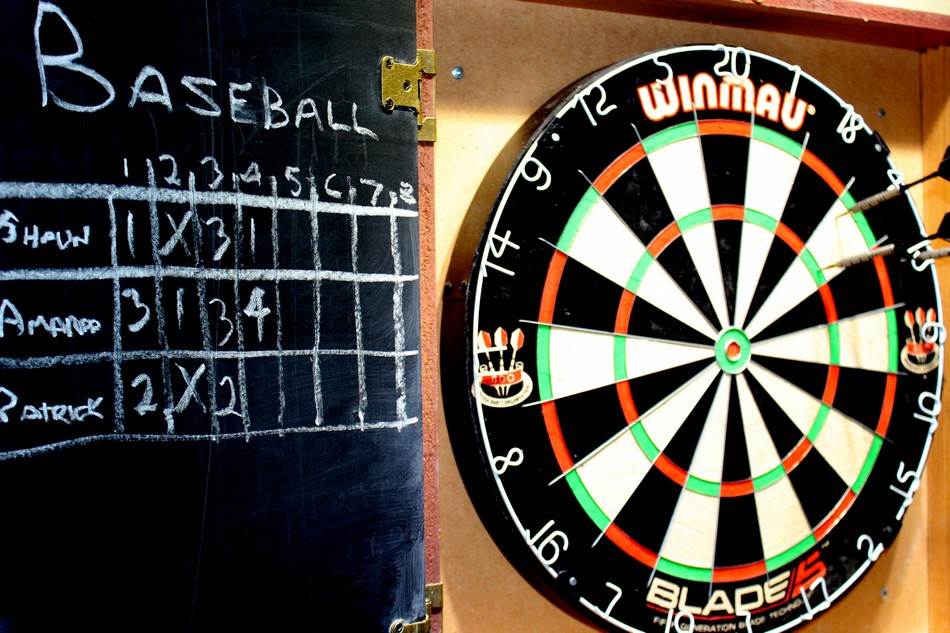 Baseball is an excellent dart game for beginning players. It forces you to aim at more of the unused spaces on the dartboard. It keeps you moving all around the board and helps you learn the numbering as you play.

It is not just for beginners, as even the best players need practice in these lesser-used targets on the board. It not only helps to increases accuracy, but it also focuses on the triples.

Baseball can be played in both single competitions and teams. It’s a fun game to get out of the monotony of triple 20s and 19s.

Baseball is one of the more popular dart games in America, but the rules of baseball darts have little to do with the actual game of baseball.

It gets its name from the fact that it lasts nine rounds or “innings.” It is also traditional to refer to each point scored as a “run,” but that is where the similarities end. Only the numbers 1-9 will be used for the game unless it goes into extra innings (more on that later).

The Rules Of Baseball Darts

In baseball dart rules, each player takes turns throwing their three darts at the number associated with that inning. So in the first inning, all darts should be thrown at the number 1 on the dartboard. A hit in the single section scores 1 run, the double is worth 2 runs, and the triple is worth 3. If a dart hits outside of the 1 is worth 0.

Once all players have had their chance at the number 1, the inning is over, and you move onto the second where the number 2 becomes the scoring target. This continues until you have completed a total of 9 innings.

The player or team with the highest score at the end of the 9th inning wins.

Like everyone’s favorite American pastime, if at the end of 9 innings the game is in a tie, the players will continue onto a 10th inning where the 10 is the target. Then 11, then 12 and so on until a clear winner is determined.

To keep score in baseball darts you should pre-mark out the nine rounds in advance starting with 1 at the top continue down the board to 9, leaving some space in case extra are required.

The names of each player should be written at the top of the board, and as they play, you can mark their acquired score beside the corresponding spot for each inning. If you are playing teams, you may also want to create a column for a running total.

Ideally, if you have space, you would want to lay things out horizontally like a traditional baseball scoreboard rather than vertically. It makes for more natural scoring but is not always an option considering the layout of most dart scoreboards.

One variation on baseball rules is playing with a “7th inning stretch”. This creates an additional rule where if a player does not score a run in the 7th inning, their entire score is halved. This can be good to mix things up but in most cases playing with this stretch can make or break a game.

Dummy Players- If you are playing baseball with teams and they are uneven, you may need to include the use of a dummy player to even out the scoring. A dummy will have a predetermined score based on the skill level of the players (usually 5, 10, or 15) and it is divided equally among the innings.

A perfect game of baseball would require scoring 81 points. To my knowledge, it has not been done. It would involve landing every dart in the triples section every round

Do you play baseball? Got any tips for the game? We’d love to hear from you, leave a comment below.