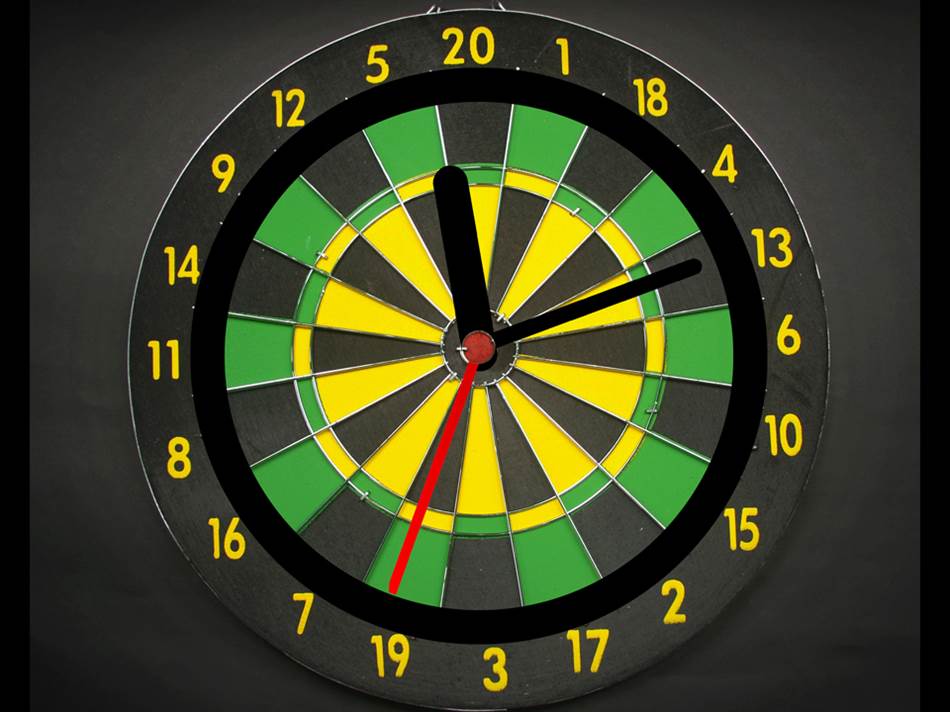 Around The Clock Darts is one of the best games to play for beginner dart players because instead of focusing on high target areas, each spot on the board gets equal attention.

There are hundreds of games and rule variations available for all occasions. Amongst these, we find Around The Clock (also known as Around The World) Around The Clock is one of the simplest and most straightforward games in the world of darts.

It is is perfect for relaxed and easy-going sessions with friends and even as a topnotch training exercise for more serious players looking to perfect their precision.

Let’s take a closer look at this fantastic little variant and learn a bit more about its rules, scoring system, and even some useful tips and tricks to get you closer to your first Around The Clock win.

Rules For Around The Clock Darts

Standard rules for Around The Clock or Around The World Darts are straightforward. The goal is to be the first player to hit every single number on the board, plus the bulls-eye in ascending order from 1 to 20.

Each player (and as many players can play this game as you like) takes turns throwing darts to hit the correct numbers, in sequential order.

Hitting doubles and triples are allowed. But remember that in a standard game of Around The Clock only the numerical value counts, so hitting a double eight is still just an 8, and hitting a triple 20 will only count as 20.

Each player will be able to throw the standard three darts per turn. Meaning that if you hit your desired number with your first dart, you can move on to the next number and have two darts left over.

However, if you are unable to hit the correct number with your three throws, your turn ends, and your opponent gets their go.

Once a player has reached 20, he or she must hit the bulls-eye to secure the win.

That’s it. Players will merely alternate turns until one person hits 1 through 20 in sequential order, plus the bulls-eye.

Scoring Around The Clock Darts

Here is where Around The Clock shines!

So how do you score Around The Clock Darts?

Around The Clock has no score, per say. Not in the sense that one player can score higher than another. It is more of a race, instead of a “game” where you have to tally scores.

At the end of each turn, the player who is furthest ahead in the sequence of numbers is said to be in the lead.

If you need to you can keep track on the board, but it is not usually necessary.

The goal is to go “around the clock” and hit each number once and in order. The first player to achieve this wins.

Another popular way to keep score is to count the number of darts used to finish a game. This can be especially helpful when playing alone, as you can set the goal of beating your previous lowest score.

If a player hits 20 and a bulls-eye in the same turn and the next player to go is within three dart throws of doing the same,  they are given a chance to tie. In case a tie arises, a head-to-head or tie-breaker round begins.

A tie-breaker round will consist of the two players alternating dart throws until a hit is registered on the inner circle of the bulls-eye.

Around The Clock Darts Variations

Around The Clock is a simple game and because of this, it is sometimes shunned by more advanced players. However, there are plenty of exciting ways in which to alter the base rule-set so that the challenge increases.

Around The Clock Darts Tips

When you play Around The Clock, it is essential to be as accurate as possible, even more so than when playing other games. In most games, if you are aiming for a 10 and hit a 6, not all is lost since you can still add up points. However, in Around The Clock, only hitting the correct number will count, and improving your accuracy will become the key.

Here are some tips for better accuracy: