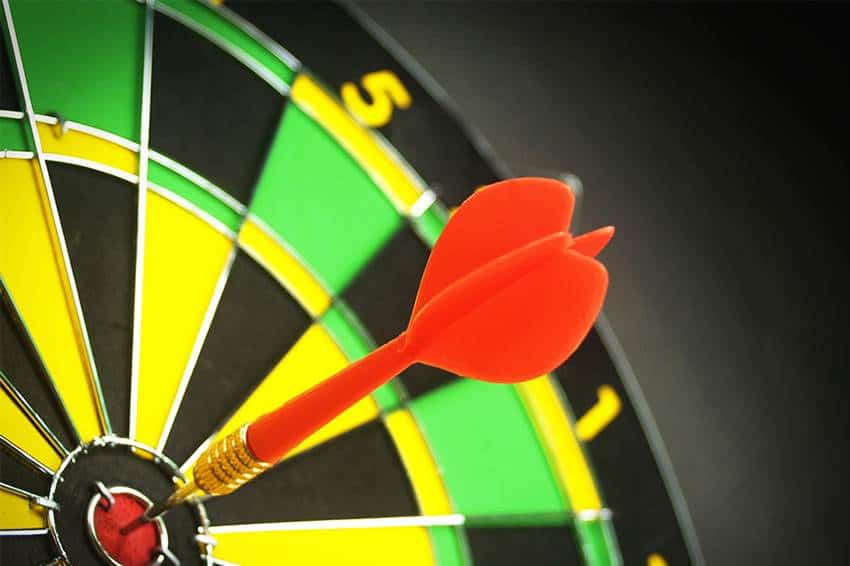 Are you tired of always playing the same game of 301’s, 501’s, or Cricket? It’s inevitable that, with time, even the most exciting of games turns dull and repetitive. So if you find yourself feeling a bit worn down or uninspired the next time you step up to the oche, I might have something of a cure. Let me how to play 51 by 5’s!

51 by 5’s, also known as All Five’s in some circles, is an intricate and difficult variation of the standard darts rule set. The point of the game is to play in a way that ensures your score for each round is divisible by the number 5.

Easy enough, right? Correct, but in practice, this little rule will keep you on your toes.

Any number of players can play 51 by 5’s. In fact, in my experience, the game becomes increasingly more fun with a higher player count.

Once player order has been established, each player will take turns throwing their three darts per round to generate a score.

If any of the three darts misses or bounces off the board, the player gets a null score for the round.

When a player throws their darts, the sum of all three dart scores must be added up.

Here is the tricky bit: The sum of a player’s three darts MUST BE DIVISIBLE BY 5 to count.

The quotient of that division, or the number of times 5 fits into the player’s score, is the player’s actual score for the round.

Therefore, in the previous example where the player’s total sum was 25, his score for the round would be 5, because five goes into 25 five times.

If a player’s total sum is NOT DIVISIBLE BY 5, he receives a score of zero for their turn.

Players take alternating turns until someone accumulates 51 points and is declared the winner.

You must score exactly 51 points to win. Going past 51 will null your score, and you will need to wait until the next round to try again.

If the participating players have a firm hold of basic arithmetic, most of the scoring can be done on the fly, which allows the scoreboard to remain relatively simple.

Otherwise, if players attempt to write down each division, it can quickly turn into an unreadable mess.

Mark a grid with every player’s name. I place all names in a column to the left of the scoreboard and leave empty space on the right for marking the score of each round.

Each time a player manages to hit all three darts, quickly add up the score, divide it by five, and write down the players score next to his name.

51 by 5’s can be an intimidating game for some people, especially if they aren’t comfortable with having to do quick thinking and some on-the-fly arithmetic.

However, we live in an age where virtually everyone has a smartphone with a calculator app.

If you are self-conscious about your ability to do the math, there is no shame in pulling up your calculator app and letting it do all hard work for you.

Skilled players should take advantage of their accuracy and aim for doubles and triples to more easily manipulate their score. If you are capable of hitting a treble 20 with all of your darts, you can score 36 points in one go.

Less skilled players should aim for the 10, 15, 5, and 20. These numbers, which are easily divisible by 5, are paired up on the dartboard, which increases the chance to get a valid score by enlarging the target area.

However, it is essential to remember that what you want is for the sum of all three darts to be divisible by 5. So, if you hit a 12, a 7, and 6, while none of the individual scores are divisible by 5, the total sum is a 25, which can be divided by 5.

So, if you whiff a throw and get a number that you did not want, not all is lost. Do some quick mental algebra and figure out what you need to hit to ensure a valid score.

51 by 5’s is challenging and not for the faint of heart; however, it can also be gratifying if you manage to keep it together. Try your mettle, and give this fantastic game a try.

More advanced players may want to set up a penalization rule for missed scores. So if a dart misses the board or total is not divisible by 5, 1 or 2 points is deducted from that player’s score.

If you enjoy playing All 5’s often and want to switch things up, you can always try another number, like All 6’s or 4’s. This will allow you to change your focus to other targets on the board to ensure other numbers get equal practice.