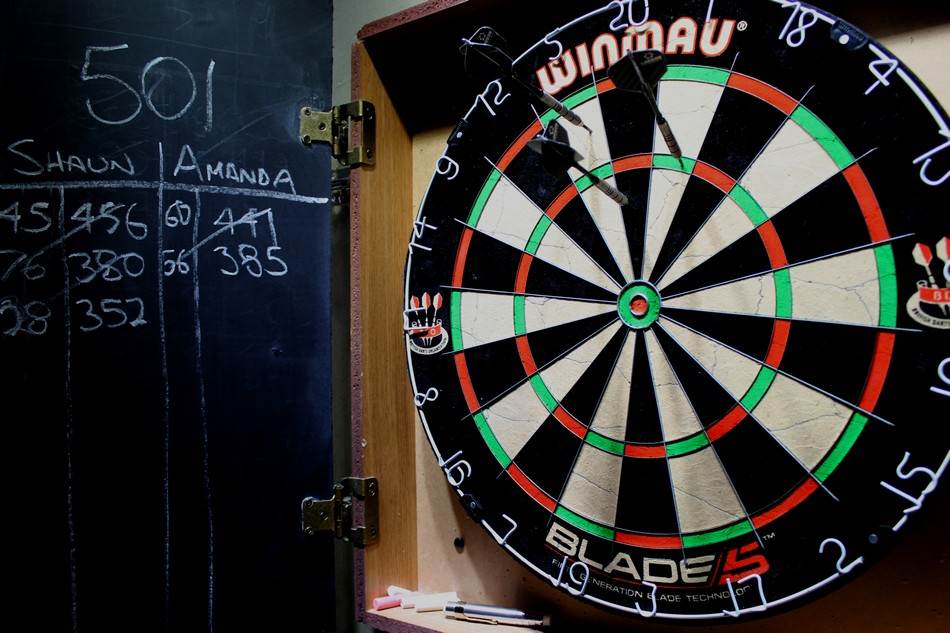 If you have ever watched a professional darts match on TV, chances are they were playing a game of 501 darts. It is the most common dart game played around the world a will likely be the first game you come across when learning how to play darts.

Of all the games that can be played with darts, 501 is the most popular. You will find it being played in every home, pub, league, and any establishment with organized play.

You will need to learn it well. But that’s ok because it is a fun and easy game to play one-on-one, with teams, or even just alone.

In this guide, we will discuss the basic rules of the game in detail and cover some tips and strategies that will help beginners.

Before we jump in, it is important to note that just about every dart game does have variations. These 501 darts rules outline the most popular forms you will find being played.

To play 501 darts the rules are simple, both players or teams start with a score of 501 points. Each player then takes alternating turns at throwing their darts at the dartboard. The points scored are removed from the total, and then the opposing player/team does the same. The first to reach zero wins the game.

However before you can start subtracting from your score, you must double-in, and to complete the game you must double-out (both will be explained below). This adds a bit more skill to the game as well as strategy when it comes to planning a finish.

Usually, a coin is tossed to determine the starting order. Alternatively, you can each throw a dart at the board and whoever has the closest dart to the bullseye starts first.

Before you can start scoring, you have to first land a dart in one of the double sections around the outer ring of the board. This is called “doubling in.”

Any dart you throw before you double-in does not count towards your progress. You can also double-in on the bullseye as this spot is considered to be a double as well.

When doubling in, the double 20 or the bullseye are the two most desirable targets as they are worth the most points (40 and 50). If you are playing with teams, only one member of your team needs to double-in.

Once a player on the team has doubled-in, scoring begins. That dart and all following darts from all players on the team count to reduce the score.

Getting Your Score Down in 501

Once you have doubled-in, the object is to score as many points per round as possible. This is generally done by shooting for the triple 20 as it is the highest-scoring target on the dartboard.

Three darts in the triple 20 scores you 180 points, which is the highest that can be obtained in one round. There are sometimes when you may want to shoot your dart for another target.

If one of your darts is blocking the triple 20, you may want to aim for the triple 19 instead, for a cleaner shot. You may also start shooting for other targets when your score is getting low enough to finish, and you want to set up your double-out.

To win the game, you have to double-out the same way you doubled-in. Doubling-out, however, can be a bit trickier.

When doubling-in, you are free to hit any double target on the board to get things started. When doubling out, you need to hit a double that will land you precisely on zero points to win the game.

It is essential that you do not hit more points than what you have remaining, this will result in a bust, and your turn will be over. The center bull is the highest target you can double-out on, being worth 50 points. After that would be the double 20 with is worth 40 points.

One person is usually assigned to do the scoring in 501 darts. This person is known as the marker or chalker. The scoreboard will be divided with a line down that middle and each team’s score will be calculated on their respective side.

After 3 darts have been thrown, the marker will add up the total of the darts on the board and deduct it from the running total on the chalkboard.

The marker should keep full attention and they should know how to how to play darts well. Besides scoring the darts, it is their job to know everything that is happening in the game, including knowing what number has been hit, how much is left, and keeping track of whose turn it is.

There are a few slight rule variations to the basic game that may be different depending on where and with who you are playing.

The most popular variation to the rules is the option to double-in. In a professional darts game, you do not need to double-in before you start subtracting from your score.

This is done to speed up the pace and action of the game. If you watch darts on TV, you will notice each round starts with the players immediately scoring as many points as possible.

If you have uneven teams, it is standard practice to play with a dummy (fake) player into the games rotation. This dummy player would have a predetermined fixed score each round dependant on the skill levels of the other players and that score will be deducted from the running total when it is the dummies “turn.”

If you are looking for a full list of 501 darts rules that apply to professional darts, the Professional Darts Corporation (PDC) uses the Darts Regulation Authority Rule Book as a guide.

I should warn you though, the rules outlined there cover every little detail of the game and it may be more information than you are looking for.

Still, it can be an interesting read for fans of the sport. Here are some interesting highlights I pulled:

As you can see, the “official” rules of play may vary greatly from the rules enforced by your local pub or league. But remember, you do not play in the PDC. So while there is an official rule book for darts, house rules supersede anything you read there.

Have any tips for your fellow darters? We’d like to hear from you. Please leave a comment below.