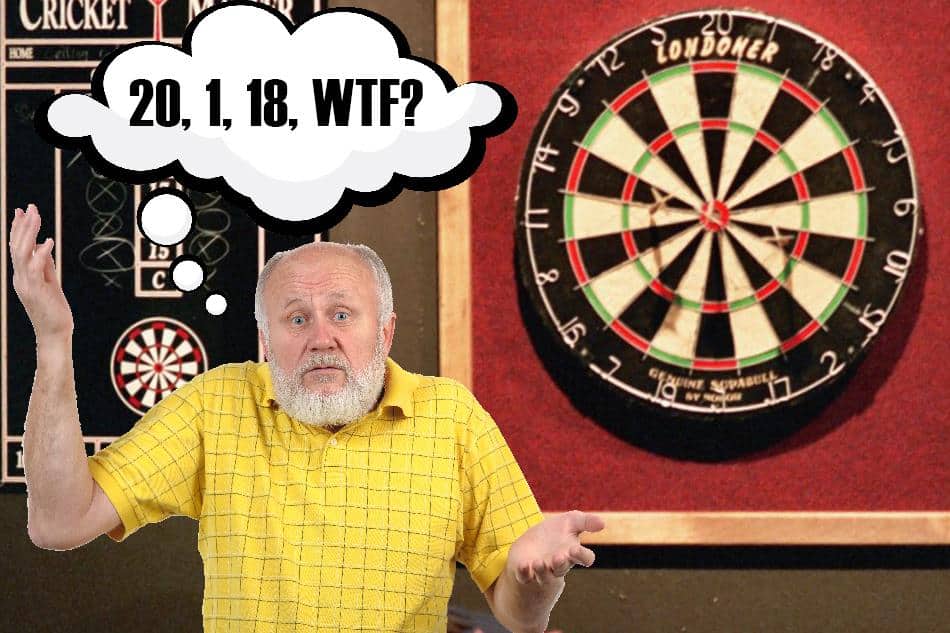 No matter their level of skill or experience, every darts player will invariably arrive at the same question; some will ask it the very second they stand on the oche, others will ask themselves the question only after years of regular play. Nevertheless, from experience, I can confidently say that the question will be asked!

No matter their level of skill or experience, every single darts player will at one point or another wonder: Why are the numbers on a dartboard in that order?

The numbers on a dartboard are ordered in such a way to increase the need for skill and remove chance from the game. Higher numbers are placed beside lower numbers on the board so the penalty for missing a dart is higher.

But how did it get that way?

In this day and age of internet forums, message boards and social networks, it seems every topic, no matter how obscure, will have a ton of so-called experts chiming in with their version of the truth.

The game of darts is by no means an exception to this rule, so depending on who you ask the question, you might get wildly different answers that range from exaggeration and misinformation to outright flights of fantasy.

Well, today, we are going to take a brief look at the history of the modern dartboard.

The origins of the game of darts date back to the early 14th century when bored archers and infantrymen began by “shooting” repurposed arrowheads at the discarded lids of wine casks.

Soon enough, the pastime gained traction amongst the military rank and file, as well as in many a royal court across a large swathe of Europe.

With this newfound popularity came significant periods of iteration and innovation, which eventually led us to the state of the game as we know it today.

To that extent, it becomes significantly challenging to identify a singular person as the “inventor” of the dartboard. However, while no one person “invented” the dartboard, it is undeniable that the way the game is played across the modern world today was shaped by one individual.

His name was Brian Gamlin.

Brian Gamlin is said to be the person responsible for developing the current method of arranging the numbers around the circumference of the dartboard.

Brian Gamlin, a carpenter by trade, lived in the county of Lancashire in the region of North West England in the second half of the 19th century.

Perhaps due to his familiarity with woodcutting and woodwork in general, Brian Gamlin began manufacturing Elm and Poplar dartboards as a means to supplement his carpentry income.

With darts being such a popular sport, as well as the fact that dartboards made of wood decay quite rapidly, it is very likely that Mr. Gamlin found no shortage of demand for work.

Brian’s involvement with darts might also have stemmed from the fact that he is said to have belonged to the traveling carnival circuit for a good portion of his adult life.

Significant participation in the setup and management of local fairgrounds will surely have given Mr. Gamlin a front-row seat to the ways of the sport of darts.

Whatever the reason behind his initial involvement, Brian Gamlin must have been a keen and observant fellow, because the logic behind his purported contribution is something to behold.

A fiercely debated point of contention around the time that Mr. Gamlin lived was whether the game of darts was a game of chance or a game of skill. And while for some, this argument might seem silly or inconsequential, it was quite important because the laws regulating gambling at the time were quite precise, and the punishment for breaking them was rather severe.

As it turns out, Mr. Gamlin was aware of the importance of establishing a clear distinction between skill and chance when it came to the game of darts.

You see, there are an astonishing 2.43 x 10¹⁸  possible sequences in which to arrange the 20 numbers around a dartboard. If that number becomes too difficult to visualize, perhaps writing the whole thing out will help.

That is a mind-bogglingly large number. That is over 2 Quintillion possible combinations. I had to ask Google what to even call a number that large.

So, with so many different possibilities, what makes the particular arrangement that Brian Gamlin chose so special?

First, Gamlin’s sequence “flattens” the distribution of numbers across the board. In other words, a flatter distribution evens out the probability of any one number being singled out.

Therefore, if a player aims to hit a specific number, that particular number is just as likely to be hit as every other number as long as the throw is left to chance.

To be more specific, following a bit of tedious math, we can quickly deduce that the “flatness” of the distribution of a sequence of numbers can be determined by calculating the sum of the squares of a set of consecutive integers.

In that sense, Gamlin’s sequence has a distribution curve with a value of 20,478.

Ordering the numbers in ascending numerical order (1, 2, 3, etc.) gives us a curve with a value of 24,350.  If you are into mathematics, the numbers behind it all is actually quite interesting.

Introducing even small variations quickly increases the value of the distribution curve. Interestingly enough, Gamlin’s sequence does not provide us with the “flattest” curve possible. However, it does offer a second advantage.

The second achievement of Gamlin’s sequence is that it not only reduces the element of chance, but it also punishes poor skill. As we previously mentioned, it is possible to theoretically achieve a “flatter” distribution of numbers across the board.

However, those potential distributions, of which admittedly there are many, would lose out on the stroke of genius that Gamlin realized.

You see, the current standard distribution makes it so that numerically adjacent numbers are as far away from each other as possible.

Not only that, but each of the high-value numbers (12 through 20) are sandwiched between lower-value numbers. For example, 20 is far across the board from 19 and adjacent to 1 and 5.

An unskilled player attempting to hit a triple 20 is far more likely to hit a significantly lower mark. Hence, skill takes a much more pronounced position in the performance of a player.

Need more evidence of this? Take a quick look at a standard dartboard, and you will see that all numbers below 10 are surrounded by higher-value targets, and the 10 and 11 spots are each surrounded by one higher number and one lower number.

Gamlin’s sequence is not a matter of coincidence.

The Matter of Thomas William Buckle

The matter of who invented the modern dartboard is undoubtedly one of significant interest to millions of avid dart enthusiasts around the world and, as such, it does not lack controversy.

You see, many people consider the evidence for Brian Gamlin’s involvement to be insufficient and lacking. Recent research has been unable to procure a death certificate for a man named Brian Gamlin around the time of his rumored passing in 1903. Further compounding the matter is the fact that Gamlin never filed a patent for his design.

Some people believe that it was Thomas William Buckle, a wire worker by trade, who came up with the standard sequence used to this day.

Thomas Buckle is given credit by some for inventing the Yorkshire variation of the board, which is functionally identical to the standard board with the exception that it is missing the doubles and trebles sections.

Whether we owe the standard dartboard to a Brian Gamlin or a Thomas Buckle remains a contentious point with fierce supporters on both sides of the debate. My take on the matter? I believe the lack of a death certificate is nowhere near as conclusive as the Buckle supporters claim.

Especially if we take into consideration that Mr. Gamlin was said to be involved in the traveling carnival circuit, which means it is possible he may have died far away from Lancashire.

Ultimately, the game of darts owes a great deal of its success to the emergence of the numerical sequence we all know and love. Nevertheless, many regional board variations see play every day across the world.

Some of these include the Ipswich and London 5’s which only use sections numbered in multiples of 5, the Kent and Grimsby boards which are huge and avoid the preferred green and red colors and opting instead for a black design, or even the Quadro which included a rather difficult to hit quadruple scoring section.

All of these variations are great and provide the game with fantastic richness and depth. And remember, after all, the Gamlin sequence is only one of 2 quintillion possibilities.