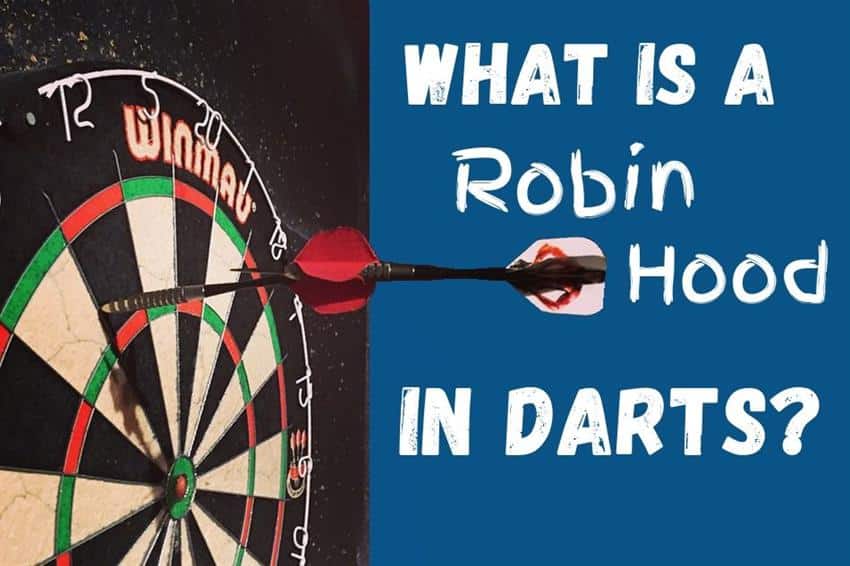 We’ve probably all heard the story of Robin Hood, the archer who stole from the rich to give to the poor, and how he beat the Sherriff of Nottingham in an archery contest by splitting the sheriff’s arrow down the middle and enter the target in the bulls-eye.

Unlike the story of Robin Hood and his archery contest, we are talking darts here. So, What is a Robin Hood in darts?

In darts, a Robin Hood is when the player makes a  throw and the dart lands directly into the back of another dart that’s already on the board. The two darts are stuck together with the tip of the second dart stuck in either the shaft or the flight of the first dart.

Does A Robin Hood Count In Darts?

A Robin Hood in darts does count as a throw but does not count for points. The reason is that in order for any dart to count for a score, the tip of the dart MUST come into contact with the dartboard, and must stay in the board.

While the dart doesn’t necessarily have to be embedded fully into the board, the dart must be touching the surface of the board inside of a number segment.

This rule applies to steel tip type darts because in electronic darts the game machine is what decides if a dart scores or not. Of course, a dart thrown is a dart played so you don’t get a do-over either and you’ve lost your turn if your dart hits a Robin Hood.

Double Or Triple Robin Hood Which Is It?

But If That Is A Triple Then What Is A Double Robin Hood In Darts?

I have tried to find a credible source to confirm these namings but after many discussions with many well-informed people, there are still disagreements. Players seem to use the terms interchangeably. Let us know what you think in the comments below.

Robin Hoods May Ruin Your Darts

A Robin Hood can ruin more than your game. While I wouldn’t worry too much about your tips. It only takes one bad Robin Hood to ruin your flights or even your shafts.

This all depends on how the darts enter each other. Aluminum Shafts can usually be bent into place if hit but if you are using nylon or a flight is pierced, it is probably garbage. Many a dart has been ruined by Robin Hood throws.

The only thing that may offer a bit of protection is metal flight protectors which not only help prevent Robin Hoods but also keep your flights at a good stiff angle. I use these bullet style protectors from Amazon.

In the end, the term Robin Hood may sound cool, but it’s not something you want to happen, especially in tournament play.