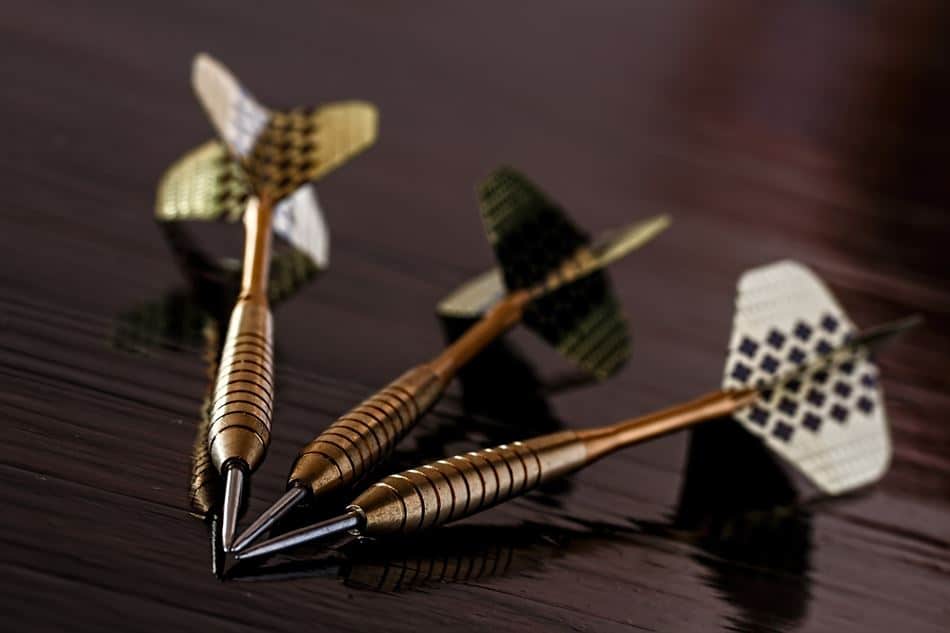 When I was growing up, my father used to always say that there are some things in life that are not worth skimping on. He would say, “Son, never buy cheap shoes and never buy a cheap mattress.”

He honestly did believe that being cheap on certain items was detrimental to one’s health and he was right. Thus, this philosophy became ingrained in my brain at a young age and it has accompanied me throughout most of life.

Naturally, when I first got into darts, one of my first thoughts was that I needed an expensive set of darts. However, what I found caught me completely off-guard!

So, what are the most expensive darts?

The world’s most expensive darts cost a bit over $4,000. The set is made of solid gold and weighs 27.35 grams each dart. Each dart is valued at about $1330 and that’s just for the material.

Before I found these barrels, my impression had always been that darts were relatively inexpensive. However, the world’s most expensive darts are anything but.

I am basing the price on the materials alone. Gold is about $50 per gram at the time of writing and while these are custom-made darts, the cost of production is negligible in a $4000 purchase.

Why Would Anyone Want A Set Of Darts Made Out Of Solid Gold?

That’s a great question, and one I’ve been asking myself ever since I first heard about these bad boys. And the only answer I can think of is to boast that you have golden darts. It’s not unlike buying a solid gold toilet, really.

However, after having done a little bit of research, I found at least some evidence that making darts out of solid gold is not such a crazy idea after all.

As it turns out, gold is actually more dense than tungsten. The difference is only slight but it is there. And while gold is very soft, if properly alloyed with trace amounts of other metals such as nickel or silver, it becomes just as strong as brass!

However, you would no longer be able to claim “Solid Gold Darts”

Nevertheless, If you have the money to splurge and would like to have a set of decadent golden darts, you will need to find a shop that makes custom barrels. These things are obviously not mass-produced, on account of being so expensive!

What Are There Less Extravagant Options?

Like I said earlier, darts are relatively inexpensive, and the cheaper brass models can cost as low as a few dollars.

To be fair, these won’t last very long if you play with any regularity. But, then again, they’re so cheap that it is really easy to replace them.

If we begin to look for higher-quality options, we’ll quickly leave brass behind, and we’ll start to encounter nickel and silver darts. These offer more durability at a higher price.

Beyond that, we get into the world of tungsten darts. Tungsten darts are the standard for most players. There are plenty of quality beginner dart sets going for cheap.

Tungsten provides dart manufacturers with a material that is denser and more durable. Tungsten, carries a more hefty price tag than other materials, with the price generally going up in tandem with the purity of the alloy.

If you cant afford the gold and are looking for something flashy, I have just the dart for you. Gerwyn ‘Iceman’ Price has a special set of darts with a diamond-infused barrel (Amazon).

Thousands of diamond grains are infused into the grip section of the barrel to help you maintain your hold. The best part is you can get them on Amazon! You can check the current price here.

I’ve been playing this game for several years now, and I can confidently say that you don’t need to spend anywhere near as much to have fun or become a good darts player.

But even if you want to splurge and even if you are rich, there is no need, whatsoever, to have the world’s most expensive darts.